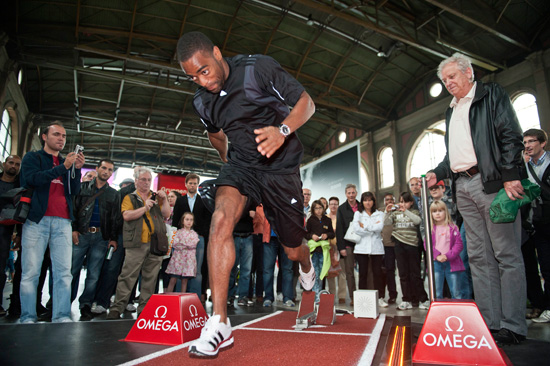 Legend Armin Hary of Germany was also attending the event. At Letzigrund Stadium in 1960 he was 23 years old when he became the first man to run the 100 m in 10.0 and in next year he went on to win two Olympic Gold medals in Rome. Tyson  Gay, on his part, has been dominating the 2010 season in the 100m. In this year he defeated Usain Bolt’s world record holder and clocking a world leading time of 9.78 in London last Saturday.

The two guests visited the exhibition and examining the cinder and the synthetic tracks laid out for the public, and of course testing their reaction times at the Omega exhibition stand. Gay’s result was 0.231 seconds, Hary – who is 73 years old – false started. “That was on purpose”  Hary smiled. 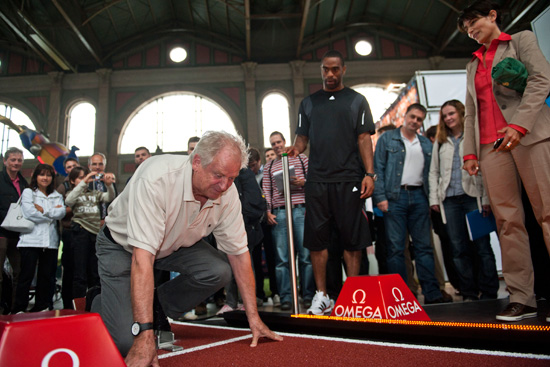 The same false start like in his first Zurich race in 1960 when he had to start twice. First time judges registered  10.0 but because of false start Hary had to run more time. The race was repeated 35 minutes later and he set 10.0 world record. Tyson Gay was impressed by the account of historical race: “I would not have been able to run two races at world record speed within such a short period of time. After my races, by body and mind relax.” Hary explained his being able to stay focused: “I had worked so much to be the fastest man in the world. Somehow, I thought Zurich was my last chance to run 10.0.”