Watches on the Moon

First man on the Moon

A man has always dreamed to walk on the Moon. July 20th, 1969, when the lunar module the Eagle landed on the Moon, the dream was realized. Edwin “Buzz” Aldrin and Neil Armstrong became the first humans to walk on the moon surface. In that exciting moment of their life Aldrin’s heart reached a top rate of 156 beats per minute while Armstrong’s reached 160. They both had the Omega Speedmaster watch model on their wrists that since then has become known as the Moon watch. People from all over the world watched the televised broadcast of the historical moment. 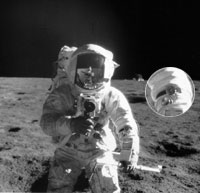 What did Armstrong Say? – “Spicy” Rumor

Everybody was curious to hear the first words of the first man on the Moon. Neil Armstrong uttered two famous phrases: “The Eagle has landed” and “One small step for a man, one giant leap for mankind”.But there is a legend that after a pause he suddenly uttered a strange phrase: “Good luck, Mr.Gorsky!”

For some time he had been constantly asked what those words meant and who was that Mr.Gorsky. But the first man on the Moon had kept everything in secret. And only many years after his famous Moon mission, Neil Armstrong confessed that when he was a 10 years-old boy he heard how his neighbors Mr. and Mrs. Gorsky quarreled and Mrs. Gorsky cried out: “You’ll get oral sex when the kid next door walks on the moon.”

Of course it is up to you to believe it or not but it looks rather as a funny but false rumor.

In 1965 NASA chooses Speedmaster as its official chronograph. From 1965 Omega watches have accompanied all astronauts in all space flights (including 6 flights to the Moon) beginning with Gemini, Apollo and Skylab up to modern Shuttle program.

On July 17, 1975 a historical meeting took place – for the first time in the history of mankind the American space vehicle Apollo and the Soviet space craft Soyuz-19 met to begin a new era of space travel and cooperation. Both American and Soviet cosmonauts wore great chronographs produced by Omega.

Astronauts to fly on the Moon were in need for a very special watch they could use while performing different tasks including Moon walk. They also took into consideration that the watch had to function properly in conditions of constant pressures and temperatures change. They subjected many different watches to a great number of serious tests in NASA. And it was namely Omega Speedmaster to successfully pass all of them. That was the reason NASA chose Omega Speedmaster as “the watch of choice” for space voyages.

Bulova insisted on using its watches in NASA programs. It complained on the fact that NASA used Swiss timepieces in the American space program. NASA had nothing against the use of the Bulova watch but it had to be tested to deserve the right to become the “watch of choice” and namely to meet all requirements for a space watch. As a result, Bulova timepiece failed the tests while Omega Speedmaster Professional passed them all. Some time later Bulova tried again to become NASA’s “watch of choice” but unfortunately failed again.