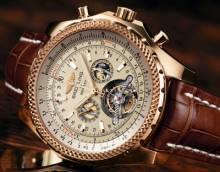 According to the recent market research, more people make use of electronic devices displaying time, with a cell phone, an iPod or a BlackBerry found on the top of the list. The research also showed that young people, in particular, prefer to spend their money on other types of accessories, such as hand bags and shoes rather than watches.

Another survey proved that almost two-thirds of teenagers never put on a watch and only about one in ten wears a watch every day. As a matter of fact, Americans spent over $5.9 billion on watches in 2006, that is 17-percent reduction if compared to 2001.

In response, a lot of watchmaking brands have added more functions to their timekeeping creations. Today you will come across watch models with heart rate monitors and GPS trackers. Luxury watches, such as Breitling and Rolex, are still highly demanded. Yet, the watch seems to be more about one’s prestige and fashion than function.

The way people keep track of time is constantly changing. Today it is possible to find out time displayed by a cell phone, the clock in the car, or from the computer screen. Modern people are somehow reluctant to check their watch – they want the watch check them. For example, a BlackBerry may produce beeps and vibrations to remind its owner of his/her obligations.

Even if someone is afraid to become a slave to such beeps, it provides an easy way to automate a lot of things that otherwise he/she would have to do manually, for example trying to keep in mind when it’s time to attend a dentist or call a business partner.

Some people claim they do wear a watch when they need to look ‘put together.’ But in this case the timepiece serves more like an accessory than is taken as a necessity. No wonder such watch-wearers have a habit of taking a watch off unconsciously and leaving it somewhere. It may be compared to a child taking off one’s socks because they seem constraining.

Unfortunately, for some people a watch has become a symbol of stress. That is why taking off their watch means the end of stressful commitments during the day, and moving into a relaxing realm where the time is not so important.

However, scientists say it is not the time itself that’s the problem.

Today we live in the world where synchronization is all important, especially if to take into account the age of globalization. To get rid of stress it is necessary to ‘leave’ this world of total synchronization. In fact, the synchronization obsession gained grounds in the railroad era, when people kept their watches in a pocket. By World War I, watches gradually moved to the wrist, as wearing a wristwatches turned out to be much more comfortable.

Still, as a contradiction to everything mentioned above, the horology world witnesses the appearance of more and more new watch brands, while old well-established brands attract whole armies of fans and collectors. It is obvious watch companies are not going to fall into oblivion and as a proof their creations become more and more aesthetically appealing and functionally improved.