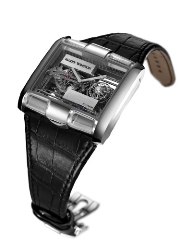 The new masterpiece from Harry Winston is the company’s 3rd mechanical superwatch of 2006/2007. Its case has a rectangular shape and it houses high precision mechanics. One can see the wheels, sliding pistons as well as rails, all of them resembling a steam locomotive.

The timepiece’s kinetic sculpture is another incredible feature of the watch, which was developed by Hamdi Chatti and his team. It is worth mentioning that after Opus 6, the Glissiere is the second masterpiece of Mr. Chatti and his team, after the watchmaker has become the managing director of Harry Winston Rare Timepieces in October 2005.

The feature that can be easily distinguished in Glissiere is the timepiece’s winding system. One of the sides features sliding block made in platinum with toothed racks, these directly starting the winding ratchet. The other side includes stylized wings, these cracking up the ratchet through pinions.

The movement’s linear configuration is outlined by the steam-age power-reserve indicator that is located along the bottom. Glissiere’s tourbillon, with its extremely precise six degrees jumps of the arc, animates the perpetual locomotion along the endless time.

Surely Harry Winston could not create a timepiece without a portion of chic. Thus the watch is enriched with a diamond endstone.

The mechanism inside the watch can be adored from the lateral windows found on the upper and lower caseband.

Another unusual part of the watch is its manual winding along with a system for time-setting.

One exclusive timepiece is made in white gold, enriched with 216 brilliant-cut diamonds, (each having 4 carats) and 180 baguette diamonds (13 carats each).