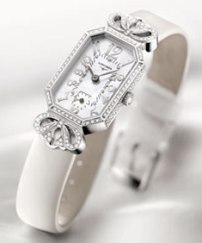 In 2007 the famous watch manufacturer, Longines, celebrated not less than 175 years of its activity on the exclusive timepieces market. It is worth mentioning that the company was founded in 1832 and its jubilee was performed in Cite du Temps, located in Geneva.

To celebrate its 175 years of heritage, the company presented its new watch model called the Longines Diamonds. While at a press conference both, Nick Hayek Jr., chief executive officer of Swatch Group, and Walter von Kanel, the president of the Swiss watchmaker Longines, presented the company’s new timepiece the Longines Master Collection Retrograde. The latter is the one to be the flagship of a collection, the destiny of which is to highlight the company’s horological tradition. 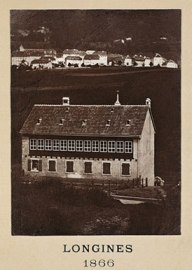 The celebration also provided a great opportunity for publishing a volume, meant to tell about the amazing technical heritage of the watchmaker. The volume is called: At the Heart of an Industrial Vocation – Logines watch movement (1832-2007) – Tradition, know-how, innovation.

The first watch produced by Longines to commemorate its 175 year of watchmaking heritage is a lady’s watch. There were only 175 pieces of the elegant lady’s watch issued. The model itself is enriched with 175 diamonds.

The second model presented by the Swiss watch manufacturer is the Longines Mater Collection Retrograde. This one is designed for men only. It includes an automatic caliber, which was created exclusively for Longines by ETA. The watch model is the flagship of the collection. 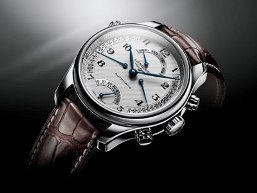 The company published a volume, which includes a wide range of watch movements created by the watchmaker throughout the 19th century and till the present day. The book was written by a young researcher, who specializes in the watch manufacturing history. His name is Patrick Linder and his book analyzes all the aspects of creating watch movements. The volume also highlights in rich illustration little known moments from Longines’ industrial adventure.

In order to celebrate the 175 years of Longines’ activity, the company added to its museum two new rooms. One shows the results of fifty years of watchmaking, between 1957 and 2007, and the other the development of watchmaker’s advertising. The two rooms represent the history of the brand.