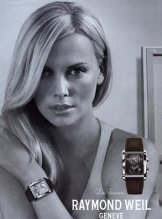 It is not a secret that watchmaking companies choose most successful personalities from the world of sports and motion pictures to take part in their advertising campaigns. Celebrities greatly contribute to further promotion of the brands’ products as they attract a great deal of attention by their image of success and glamor. International stars enjoy love of army of fans  that makes the advertised products reach the hearts of more and more people.

Unfortunately in some cases the brands and their ambassadors suffer from misunderstanding, as it recently happened with Charlize Theron and Raymond Weil.

In February, 2007 the Swiss watchmaking company filed a breach of contract lawsuit against the actress. According to an endorsement deal, signed by Charlize Theron, the Oscar-winning actress agreed to wear in public only the brand’s luxurious timekeeping creations in the period from October, 2005 to December, 2006.

That deal gave Raymond Weil the exclusive right to use photographs of the actress in its advertising activities. Naturally, Charlize Theron was generously rewarded for being the brand’s ambassador.

However, in March, 2006 the actress signed another endorsement deal about the promotion of a Dior perfume. There appeared photos of Charlize Theron wearing a Christian Dior timepiece at a film festival that took place in Austin, Texas. Visitors of the festival could see the photo of the actress with the Christian Dior watch on her wrist.

The Raymond Weil-Charlize Theron agreement did not allow the actress participate in any advertisements for jewelry items, even for charity purposes. However, the Hollywood star took part in an advertisement to support an Anti-AIDS charity campaign, wearing a necklace. As stated by the court papers filed by company, Charlize Theron violated the agreement, valid from February, 2006 to December, 2006. The complaint had a right to believe that the signed agreement would keep their celebrity partner from promoting any watch and jewelry pieces.

It has not been mentioned how much Raymond Weil is seeking in damages, but the company had spent an overall of over $ 20 million on the advertising campaign ‘staring’ Charlize Theron.