on: Oct 07, 2009In: Celebrities and FashionNo Comments 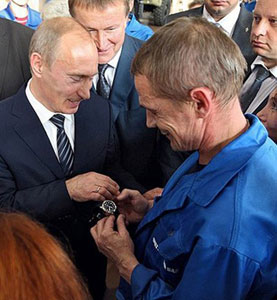 Timepieces take a special place among politicians’ accessories. We can easily prove that expensive luxury watch is the real standard of luxury consumption. As a rule lands, real estate, airs and yachts can not be seen by everybody except paparazzo or bailiff. But clocks on the contrary are something that everyone who watches TV new regularly can notice. And even despite of its high price sometimes it can be a good and rather astonishing present.

Russian businessmen, political elite and art bohemia prefer gold swiss watches by best makers that have been on the market for several centuries. For example, Russian Prime Minister Vladimir Putin, the second man after the President, wears the most expensive watch among Russian politicians. Rather defiantly you know, especially taking in regard that watch usually reflects the status of its owner.

On Putin’s right wrist one can notice $60,000 Patek Philippe Perpetual Calendar watch. It is a surprising fact that the cost of that watch is practically equal to the amount of money President earns per year.

So he is to be a devoted fan of Swiss watches as through 2003 Putin wore the same brand though another model – Patek Philippe Calatrava. Patek Philippe is considered to be a very conservative and expensive brand. Its designers work out a watches for rich people, presidents and politicians. It is noteworthy, that this brand does not like public advertising.

But as easy as Prime Minister gets his watch he grants it. Being recently in Tula, a factory town, Putin astounded plodders by gifting his latest luxury swiss watch to a factory employee Viktor Zagaevsky when the man asked for a memento. So the worker became a scoop in a moment by having £ 5,500 black Blancpain. Victor’s son Dmitry recited that he had got the watch. But neither he nor his father could ever afford themselves to buy such an expensive thing like original swiss watch. He admitted that the men in their family usually wore fake-brend watches because of the economy it brings. Such imitations rare cost more than 1,000 roubles, or £ 20 were his words. In another case, it would take Dmitry’s father two years to save enough money for the purchasing of Putin’s watch. And thus princely gift became a family relic.

As a reference Blancpain manufactures mechanical swiss watches for the luxury market.

It is hard to assume the exact motives which ruled Prime Minister that day. Perhaps the fact that victor Zagaevsky imparted Putin that both his two sons were serving in the Russian army. And thereby arousing some patriotic feelings in the former President.

(But it is not ruled out that Putin fingered such a generous jest simply to get rid of black Blancpain and thus to emphasize his devotion to the favorite brand – swiss and luxury Patek Philippe.)