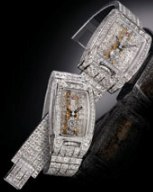 The case of the watch is tonneau-shaped is made of 18 carat white gold. The same metal is used in the timepiece’s bracelet. Golden Bridge’s dial includes open-worked hands, which are accurately crafted in black gold.

The timepiece created exclusively for men features pav?-set princess-cut diamonds, all in all totaling 92.88 k; the model created for women totals 54.9 carats. The formed model is valued at $1 million and the price of the latter is $700,000.

Among the additional features of Golden Bridge watches there is a 40-hour power reserve along with 3 accurately shaped and cut sapphire crystals.

There are only five sets of Golden Bridge watches for men and women launched on the market. The pair presented in the United States is the only one in the country.

For celebrating the event Neiman Marcus will set several parties in the middle of October. Especially for these events several brands will produce limited-edition items.