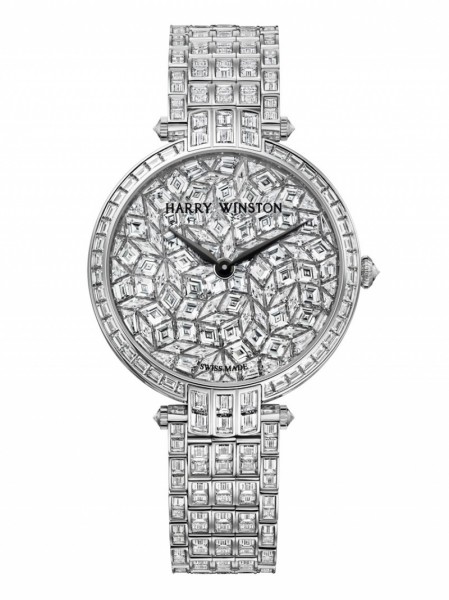 This fantastic beautiful watch with quarts-powered mechanism and diamonds, presented at BaselWorld 2013, is really something special. It’s been represented like exclusive and quite unusual accessory for ladies. And its features are really impressive! Its polished golden case has 36mm in diameter. And this watch is covered by shining diamonds, making fantastic glacial illusion. It seems that gem stones are scattered randomly. But in fact designers were working hard to make you think so.

The first purpose of creating process was to make a small carved grid on a dial plate. For each diamond microscopic chamber was engraved with accuracy up to hundredths of a millimeter, so that the metal plate became completely invisible. Now the dial is decorated by 108 baguette-cut brilliants of 8.88 carats, and, as watch creators said, only 5-7 of these diamonds were set per day due to the high complexity of the procedure.

No doubt, this diamonds watch was the most complicated project Harry Winston’s masters were ever dealing with. Considering that, they decided to provide their creation with the luxurious bracelet, decorated with 254 diamonds, weighing approximately 16.1 carats and to complete the watch-case with 130 diamonds, weighing 5.51 carats.

This watch named Harry Winston Premier Glacier exists in only five exemplars in the world and so it’s available in a very limited edition. Each «Glacier» is decorated by 497 diamonds, weighing approximately 30.59 carats. This unique watch has water resistance to 30 meters and bears a reference number PRNQHM36WW014.