A Watch for Safari Hunters 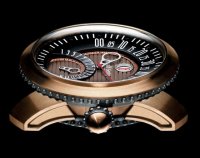 The new Gerald Genta watch has united two different realms – the one of the Swiss watchmaking and the African savanna. The Gefica Safari creation was inspired by the arts and landscape of Africa. The sophisticated architecture of the model reminds the volcanic topography of the country and the geometric lines of its Primitive Arts.

The two-tone case is produced from bronze and titanium. The Gerald Genta company is the first to introduce such combination of materials. The idea to use bronze initially appeared in 1988, the year when the company, at that time owned by the prominent watch designer Gerald Genta, developed the first Gefica watch. 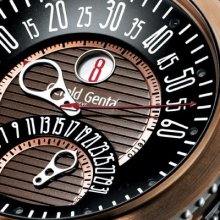 The original model of the Gefica was meant to satisfy the needs of hunters. The watchmakers opted for bronze as the metal is matte, not gleaming in the sun – thus not giving away the hunter’s location to his prey.

According to the company, the name of the Africa-inspired timepiece is composed of the initial letters of the last names of three friends – Geoffroy, Fissore and Canali (GeFiCa). The friends got involved into a big-game hunt in Africa. They were struck by the idea of developing a timepiece for hunters.

The company wanted to produce an avant-garde haute horlogerie watch with the bezel edge shaped to remind the rim of a volcano crater. You will also notice the twin rows of titanium beads on the middle of the case and the crown. This unconventional detail was suggested by the African tribal art featuring the similar body painting on bronzed skin and geometrical shapes.

The dial of the Gefica Safari, revealing the brand’s distinctive jumping and retrograde displays, is an unforeseen composition of shape and structure. At 12 o’clock there is a jumping-hours aperture. The upper part of the dial sports a retrograde minute display, while a retrograde date display is found in the lower part.

The Gerald Genta Gefica Safari is powered by an automatic movement beating at 28800 vibrations per hour. It offers a 45-hour power reserve. The brand’s specialists have based the movement on a Girard-Perregaux 3100. The timepiece goes on a hand-sewn alligator leather strap with titanium triple folding clasp.