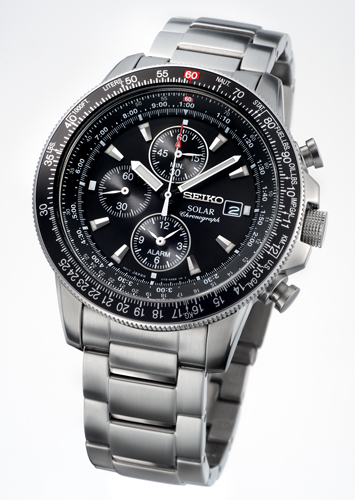 Seiko brand can be attributed to environmentally friendly ones through using new watchmaking technologies which save the energy. One of its recent inventions is a Solar powered Pilot Watch. By creating this timepiece Seiko makes an important move towards a healthier and “greener” life on planet.

First Solar Seiko was released in 1977. Seiko’s new Solar powered Pilot Watch is a useful piece in aviation. Operating on a solar battery, it also contains several important functions for navigation. For example, chronograph function or the rotary slide rule for any flight data conversions.

The new Seiko solar powered watch has a powerful battery which never needs to be changed. It can be charged by all kinds of light after only five hours of being exposed to sunlight. The fully charged Solar powered Pilot Watch has for up to six months’ power reserve, even in utter darkness. Special attention should be paid to its dial, which is all black. It makes the Seiko solar technology even more unique.Before this high-efficient technology was introduced the dials had to be opaque to let the light go through the solar cells. But thanks to new solar calibers, the dial is pure black, and it allows the pilot maximum time visibility.

The watch features a 43mm diameter stainless steel case, hardlex crystal glass, and a 10 bar water resistance. As a special function it has an overcharge prevention. The new generation of Seiko solar powered watches starts with new Solar Pilot Watch.