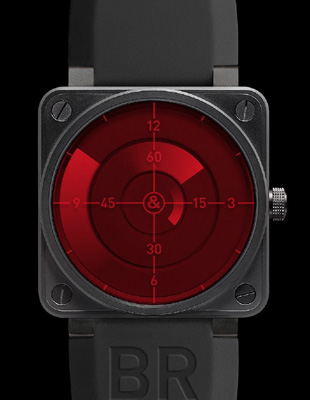 Last year Bell & Ross have proposed radar to be a new method for measuring and understanding of time. This idea was successfully, and this year this creative watch maker have stepped forward in the direction of radar display and made a series of limited edition watch – BR 01 Red Radar.

Diameter of splendid case is 46 mm; display of BR 01 Red Radar is very similar to radar of air traffic device. It doesn`t have standard hands, instead of them there are three separate concentric discs (the outside disk represents hours, the middle disk – minutes and the central disk – seconds respectively) with independent red beam in each of them. Each beam moves in its circle and becomes brighter and  the brightest end of beam replaces the end of hand. Two intersecting axes split the dial into four parts and make clear understanding of time.

The crystal is mineral tinted red and reinforced with an extra protective layer; as to water resistance of BR 01 Red Radar it is 100 meters. Rubber straps are the final touch to the sporty and dynamic image of BR 01 Red Radar. The quantity of new Bell & Ross limited edition watch is 999 pieces.

Here is the presentation video of Bell & Ross BR 01 Red Radar at Baselworld 2011: