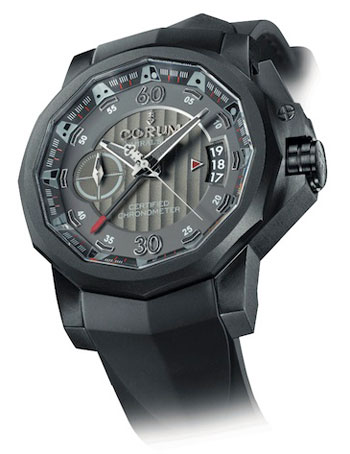 In 2010 Corum celebrates the 50th anniversary of one of its most popular collections: the Admiral’s Cup. To celebrate this event Corum has presented a number of new watch models to the collection and one of them is Admiral’s Cup Chronograph 44 Centro Mono-pusher, equipped with a new complication – mono-pusher chronograph.

The interesting part is that Centro Mono-pusher uses two centrally placed chronograph hands rather than traditionally placed in a dedicated subdial. One is used for seconds and another is for the chronograph minutes (up to 60 minutes). And the small subdial is used for the seconds for the main time.

The new Admiral’s Cup Chronograph 44 Mono-Pusher Centro is Limited to 555 pieces only and certainly a model with niche appeal.

By the way, for those who prefer twin-pusher chronograph Corum has Admiral’s Cup Chronograph 48 Centro.