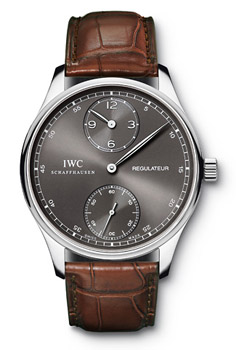 One of the watches in IWC’s Portuguese line, is the Portuguese Regulateur. The regulator watch design was inspired by early marine chronometers. The precision mechanical timekeeper that is sure to gain great popularity among men is housed in the platinum case with 43 mm in diameter. The platinum models are limited to the edition of 500 pieces, while rose gold or stainless steel ones are to be produced in unlimited number.

It is notable that the timepiece is equipped with the IWC Caliber 98245 that is based upon a prime pocket watch movement. The mechanical mechanism is to be wound by hand. It is beating at 18000 vibrations per hour and provides a considerable power reserve of 46 hours. It celebrates the IWC’s history comprising about 140 years in watchmaking. During this period the brand’s watchmakers gained great experience in constructing impeccable movements subjecting them to evolution process. 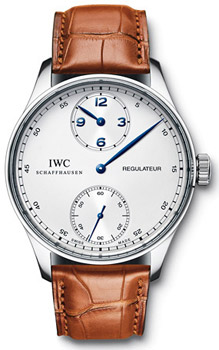 If someone not really experienced in watchmaking drops a quick look at the Portuguese Regulateur’s dial, he might think that the IWC watchmakers merely forgot to add the hour hand. But the lack of conventional hour and seconds hands is the essence of the secret kept by regulator watch’s time display. Just a real expert will appreciate the exclusive advantages of the model.

What are those benefits distinguishing the Regulateur watch time-telling from a common one? The seconds, minutes and hours unites are set apart from each other. You will notice the hour display placed in the upper part of the dial, while the small seconds display occupies the lower part. As for the minutes hand – it corresponds to our usual perception being placed in the center of the dial and moving along the dial circle.

The described above variation of time display was especially practically useful in those times when the precision chronometry was making the first steps. The observatories used grandfather or wall clocks that featured the same dial architecture. From time to time the marine chronometers also featured the separate arrangement of hands. This allowed to keep the slowly moving hour hand from hiding the important seconds hand. You can imagine that the seconds hand was all important for those who worked at the observatories or on board of navigating ships. Moreover, the time featured by new watch models produced by watch manufactures was set or ‘regulated’ according to the timepieces with separate displays.

The IWC Regulateur watches reveal a precious chronometry tradition. They introduce everyone interested into the realms of watchmaking precision instruments with the history dating back to the 18th-19th centuries. The IWC Company has enlivened and maintained this notable tradition through developing the exclusive Portuguese Regulateur timepieces that are destined for real connoisseurs of art of time-telling.