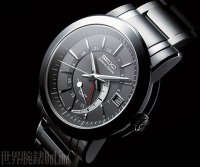 Seiko considers its Spring Drive to be the second by importance watch ever developed by the company. The story of the Seiko Spring Drive started back in 1977. Yoshikazu Akahane, a young engineer of Seiko watches in Japan was overwhelmed by the idea to invent a mechanical timepiece that would provide the same level of accuracy as a quartz watch.

During the day the engineer worked upon the development of Seiko quartz watches. Later, by night Akahane tried to create an ‘everlasting watch’, as he called his future invention. The engineer wanted to replace the escapement considered to be a mechanical movement’s weakest link with a time-regulating electronic system. The system was meant to considerably improve the accuracy provided by a mechanical timepiece. in his notebooks Akahane drew a mechanical movement with a mainspring, barrel, gear train and other components, wired to an integrated circuit.

In fact, today it seems ironic that in the 1970s an engineer from Seiko took efforts to increase the accuracy of a mechanical movement. It was the Seiko company that started the quartz watch revolution in December 1969, having launched the first quartz watch in the world. It was the analog quartz Astron 35SQ.

In the 1970s the Seiko company introduced a series of electronic timepieces that turned the horology world upside-down. There appeared the first ever ground-breaking LCD digital watch with six-digit display in 1973. Two years later Seiko released the first in the world multi-functional digital watch. The Seiko digital quartz alarm chronograph appeared in 1977. Due to the Seiko efforts quartz watches completely overwhelmed the watchmaking industry. Many experts started to believe that mechanical watches would soon fall into oblivion. 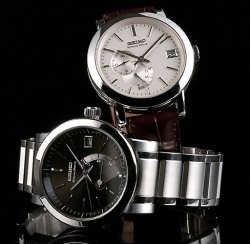 Still, Yoshikazu Akahane wanted to create a timepiece that would combine the best characteristics of both mechanical and quartz mechanisms. He continued his experiments and then shared his ideas with his colleagues. The superiors of the engineers were really impressed by his idea of developing an ‘everlasting watch’ and provided him with the necessary support for the project. In 1982 there appeared the first prototype. The process of re-engineering of a mechanical timepiece turned out to be really complicated. The second prototype appeared only 11 years later.

The watch of Akahana’s dreams appeared after 28 years of research and development, 230 patent applications and 600 movement prototypes. The Seiko Spring Drive was released in October, 2005. The new timekeeping creation represented a mechanical watch provided with the time-regulating system developed by Seiko Epson. The Spring Drive offered the same timekeeping accuracy as an analog quartz watch powered by batteries.

In the heart of the Seiko Spring Drive there beats automatic Caliber 5R, a real wonder of ‘mechatronics’. Caliber 5R was developed in two versions -one that comprised 276 parts and the other with 280 parts. These are manually assembled by the five most experienced Seiko watch-makers who work in a special master watchmakers’ workshop .

Following the steps of a conventional mechanical watch, the Spring Drive uses a mainspring as a power source for turning the hands. Like a quartz watch it incorporates an integrated circuit and quartz crystal, thus maintaining the accuracy of +/- 15 seconds per month that corresponds to the accuracy provided by a battery-driven analog quartz watch. The Seiko watch-makers replaced the escapement, the traditional time regulating system in the mechanical timepiece, with a new Seiko Epson device for time regulation. As a result, the mechanical-electronic-technology combination provided the Spring Drive with four important advantages over a conventional watch driven by the mainspring.

The development of the Seiko Spring Drive marked the brand’s joining to the international world of the luxury mechanical timepieces until then dominated by the Swiss watchmaking companies.