World’s biggest watch auctioneer, Antiquorum, held this year’s final auction, resulting in a historical record breaking sum of $ 9,612,051 for its Important Collectors’ Wristwatches and Pocket Watches & Clocks sale. The auction held an enormous number of on-line and commission bidders. The sale included 402 lots. From all the lots, bidders from Hong Kong, Switzerland, and The Russian Federation sold 84.58 percent by lot and 119.34 % by value. 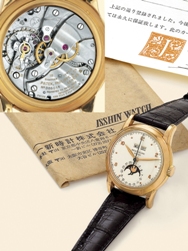 “We are very pleased by the outcome of today’s sale which reflects the willingness of collectors to pay premium prices for timepieces that have never been seen at auction before,” outlined Julien Schaerer, Watch Director and Auctioneer, Antiquorum USA.

Lot 366, which was a set of 4 Patek Philippe Calatrava wristwatches, having cloisonn? enamel dials, was purchased for $ 254,800. 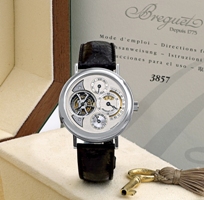 Among other great purchases, the creation of Gerald Genta can be outlined. The company sold its “Grande Complication” for $ 350,000. Breguet was also among the brands to obtain its piece of pie worth $ 445,200 for its Breguet “250th Anniversary” Ref. 3857PT. In addition, FP Journe got $ 82,600 for its “Tourbillon Souverain a Remontoir d’ Egalite avec Seconde Morte”.

In the end both Omega and Audemars Piguet obtained great results. The former fetched $ 38,940 for its Omega “Chronograph”, while the latter got $ 23,010 for its Audemars Piguet White Gold Skeletonized wristwatch.

“Today’s results once again attest to the strength of the US collectors’ market and demonstrate just how far it has come in the past few years” mentioned Evan Zimmermann, COO and Managing Director Antiquorum USA.