The most popular Swiss watchmaking brand, Rolex, continued its role as an underwriter at the Alzheimer’s Association Rita Hayworth Gala, which takes place each year. This particular event was held last month to commemorate the screen legend Rita Hayworth, who was affected by the disease when she was in her 40s.

The event that took place in New York at the Waldorf Astoria Hotel on October 10 has risen above $2 million, destined for the Alzheimer’s Association. 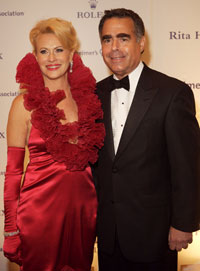 It is worth noting that Rolex Watch USA has been the underwriter of the gala for the past 5 years. In addition Allen Brill, Rolex President and Chief Executive Officer, has stated that the company looks forward to continue being the underwriter through 2012, when the watch brand will celebrate its 10-year anniversary as the sponsor of the event.

For information it is interesting to note that the daughter of Rita Hayworth, Princess Yasmin Aga Khan, founded the Rita Hayworth Gala more than twenty years ago. After its establishment, the event raised more than $48 million for the association’s care, support and research.