on: Apr 17, 2007In: Celebrities and FashionNo Comments 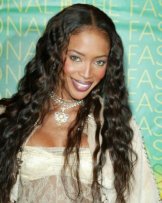 British – born supermodel Naomi Campbell is universally famous as an iconic figure in the fashion industry. Naomi entered the modeling business about 15 years ago and caused a real sensation due to her irresistible beauty and a sophisticated, hot style.

One thing Naomi is notorious for is her explosive temper. In January, 2007 the supermodel was charged by her maid, Ana Scolavino, with the personal assault. Naomi threw a mobile phone into the head of the housekeeper.

As the punishment for the assault, the New York Court assigned Naomi Campbell to perform five-day community service as a cleaner at New York’s sanitation department, including sweeping and mopping floors. In addition to that Naomi had to pay the fine and sign for special anger management course.

However, even at the community service Naomi attracted everyone’s attention by her unique sense of style. During her first day at New York’s sanitation department, the supermodel wore a stylish Ralph Lauren coat and stiletto boots designed by Christian Louboutin. Since then, the designer’s boots have become best-sellers  Louboutin received over 1,200 for the pair worn by Naomi.

The British model managed to make her community service seem to be a part of some luxurious fashion show on the following days the supermodel appeared in Giuliana Teso coat bought for $ 2,000 and a black leather Burberry jacket for over $5,000. Still, a real stir was caused by Naomi’s Hermes carry-all bag available priced at a breath-taking $ 15,000.

Having fulfilled the community service, Naomi admitted in one of her interviews it was a useful lesson for her. Despite of the humbling experience, which included cleaning walls, tables and offices, Naomi enjoyed meeting simple people who were well-mannered and really honest. The supermodel even made friends with a man and his wife and had dinner with them. Probably the community service helped Naomi fill the gap of very few upright people she is surrounded by in her everyday life.