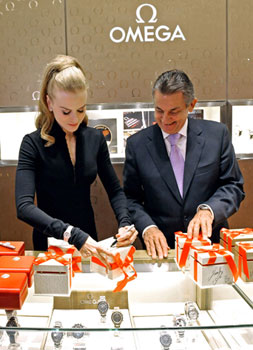 Devoted actress is regarded as one of the finest actresses in the world. In 2003, she won an Oscar for her brilliant portrayal of troubled author Virginia Wolf in The Hours and she has been nominated for seven Golden Globes.

Since joining OMEGA’s family, Nicole Kidman has figured prominently in the “My Choice” advertising campaign and has made select public appearances on behalf of the company.

Additionally, Kidman signed the boxes of thirty select, recently released OMEGA Constellation timepieces which will be available for purchase at the Fifth Avenue OMEGA boutique. In the new collection the box and its contents were placed in a transparent safe which was locked and taken inside the shop where it is now on display.

A portion of the proceeds from the sales of these signed watches will be donated to Kidman’s charity of choice, UNIFEM: the United Nation’s development fund for women. Alongside her acting career Kidman is a tireless campaigner for children’s and women’s rights and is a Goodwill Ambassador for UNICEF Australia and UNIFEM. The United Nations has also named her a “Citizen of the World”.

Together with model Cindy Crawford and actress and Zhang Ziyi Nicole Kidman is OMEGA’s global brand ambassador for the Constellation line. 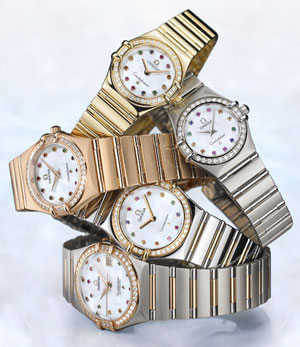 The OMEGA Constellation – a brilliant configuration of stars. OMEGA’s Constellations with their distinctive “griffes” or claws have been among the most popular and recognizable wristwatches in the world. The collection features watches and memorabilia that include Olympian Michael Phelps’ Planet Ocean Chronograph, Apollo 11 Astronaut Buzz Aldrin’s Speedmaster Moonwatch and Golf Pro Sergio Garcia’s Mission Hills Double Eagle Constellation Chronograph.

As it is known OMEGA has been chosen for an official chronographer of Vancouver and Whistler Olympic Games 2010. Nicole Kidman is also to be a special guest at the Games ranking with other OMEGA’s ambassador celebs George Clooney, Daniel Craig, Michael Phelps, Sergio Garcia, Michelle Wie and others.