A Photo Exhibition by The Police resented by Zenith Swiss

on: Dec 12, 2007In: Celebrities and FashionNo Comments 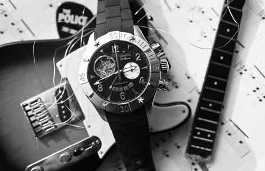 The popular Swiss watchmaking company Zenith presented an exhibition entitled “I’ll be watching you: Inside the police 1980-1983.” This photo exhibition was provided by Andy Summers of The Police.

It’s a great event that combined the lively art of photography created by one of the most famous rock guitarists in the history of rock music and highly-prestigious, and at the same time rather edgy watchmaking company from Switzerland. It is worth noting that the exhibition was held at NYC Milk Studios.

Both Zenith Swiss Watch Manufacture and the rock star of The Police, Andy Summers, were the main characters to lunch one of New York’s most exciting and artistic evenings.

Throughout the invitation-only VIP reception, various musicians, fans, artists and friends of the star and the watchmaker admired behind the scenes series of photos performed in black and white that highlight the early days of the rock band.

The exhibition’s special piece of art is the picture taken by Andy Summers exclusively for Zenith. The rock star shot the company’s Defy Classic Open watch. The most remarkable spot of the evening occurred when the president of Zenith North America, Paul Ziff, presented a Zenith timepiece to Andy Summers.

“As an acclaimed professional artist in two distinct areas, Andy Summers embodies the spirit of Zenith. That he is incredibly talented, versatile and a true Renaissance man is abundantly obvious. That he exudes a style and manner that is both warm and gracious is his gift. We are very proud to have Mr. Summers wearing a Zenith timepiece” outlined Paul Ziff.

It’s worth mentioning that the event was enriched by The Police’s 2 concerts at Madison Square Garden where all tickets were sold out.