Corum is a rather young Swiss watch producer that celebrated its 50 anniversary last year. But today it is not only one of the most prestigious watch brands but one of the most creative ones.

Bold and varied design of the Golden Bridge Adam and Eve Watch just cannot be disliked. As for its quality, it is not worse than the models of the companies with centuries-long traditions. Every watch series from Corum is full of new ideas and philosophy. The new model from famous series Golden Bridge is called Adam and Eve Watch. 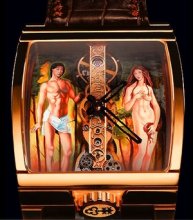 The first model Golden Bridge appeared in 1987. Since then the collection has regularly been renovated with limited edition series that stand out from other brands production by their originality. “Superb craftsmanship combined with the endless search for beauty and innovation” is the Corum’s motto.

It is not obligatory to buy a wrist watch with a hundred of diamonds to look stylish. Sometimes an elegant gold, craftsmanship and original idea are enough. The distinctive feature of Golden Bridge Adam and Eve Watch is a hand-painted dial where two legendary dwellers of the Garden of Eden are portrayed.

It took 36 hours of near work to paint Adam and Eve standing on both sides of the dial and 15 hours to dry up the masterpiece in various stages.

As for the watch mechanism, it is made of 18 K gold and reminds of the ill-fated tree from the legend. The mechanism itself is transparent so you can see how it works. Black hands measure time as if showing how much time is left to the next forbidden fruit temptation and the next Fall.

The watch is put into a rectangular case made of pink gold with four sapphires. Power reserve is 40 hours. The black strap is made of crocodile leather. “Paradise” watch is produced in limited edition series of 50 pieces and the price range from $ 30,000 to 50,000.