Recently Harry Winston opened its first boutique in Beijing, China. To celebrate this important event Harry Winston created a very beautiful and colorful addition to its famous collection Avenue. The Exotic Birds theme inspired the designers to this amazing mini-collection.

The line is launched in limited edition series consisting of 5 sets (4 pieces in each). It will be possible to buy watches as a set or just one watch model. Harry Winston Avenue Exotic Birds mini-collection is of a great interest to potential customers, watch collectors and connoisseurs. 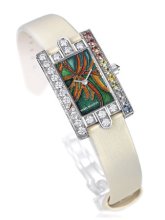 Despite the fact the watch dials are not big, the company’s specialists managed to create fascinating pictures of exotic birds as if coming from a fairy-tale.

Bright colors strike the imagination and revive spirits. The image of the bird is formed due to its colorful plumage. For the first time they combined enamel with diamonds.

The “King of Diamonds” Harry Winston just could not manage without sparkling and gorgeous stones. And it has turned out to be a great and successful combination. They chose white diamonds and sapphires, picking up very carefully only the best stones. It took a rather long period of time and it was a very painstaking job to create the timepieces.

A special attention was also paid to the straps that are made of satin and make a great match with the dial. It produces a very harmonious effect.

The unique mini-collection Avenue Exotic Birds from Harry Winston will be produced in a limited edition series and there will be only several boutiques worldwide. Moreover the company participates in charity actions. For example it is committed to making its contribution to famous Antiquorum auction. The profit will be given to an association for Duchenne Muscular Dystrophy in Monaco.