Inside and Outside of World’s Most Famous Swiss Watchmaking Companies 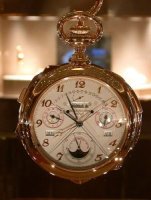 You surely have heard a lot and seen marvelous mechanical watches made by Swiss watchmakers. Being a collector or watch enthusiast is not necessary if you adore art and exclusive design. Mechanical timepieces are surely amazing, but have you ever wondered where these watches are made and where watchmaking professionals work to create complicated mechanisms? Here is a small overview of insides and outsides of some of the most famous watchmaking companies.
[divider] 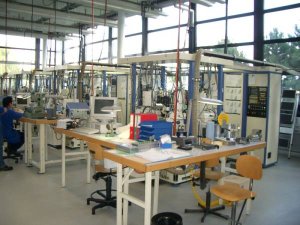 The headquarters of Swiss watch manufacturer represents a beautiful modern building. It has a huge abstract coiled spring sculpture, situated in front. The sculpture leads into Patek Philippe’s towering reception area, which, in its turn is decorated with a beautiful big wall relief that represents the company’s famous Calibre 89. The whole relief is situated on two walls: one has an elaborate watch mechanism, and the other an airy sculptural clock, created by Jean Kazes.

Patek Philippe’s facilities are the home of master watchmakers. Various experts, who repair and polish cases, reconstruct bracelets, enrich watches with diamonds are all together responsible for bringing back to life exclusive watches marked Patek Philippe. The work is made regardless of age of the watch or how much care it needs. Because watchmakers from Patek Philippe have different watch parts that are stocked for some very old models, any timepiece can be repaired. 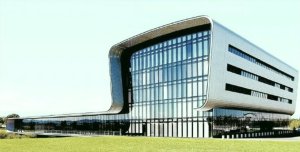 The new Vacheron Constantin movement facility is located in Geneva suburb of Plan-Les-Ouates. This industrial park is also the home of such Swiss watchmaking giants as Patek Philippe, Rolex and Piaget. 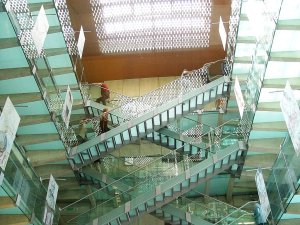 It is worth mentioning that Vacheron Constantin is the oldest watchmaking company that continues functioning till this day. In 2005 the company, founded by Jean-Marc Vacheron, celebrated its 250th anniversary. 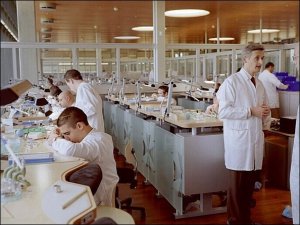 Vacheron Constantin’s new facility has an exceptional design, having an ultra-modern glass facade and metal skin. It is also extremely nice on the inside. Its halls and rooms have an amazing modern touch. The facility has lots of light and an huge central atrium – a great place for watchmaking dreams.

The company still keeps its watch factory in the Vallee de Joux, where about 75 employees work in several departments, including: R&D, Components Production, Decoration, Assembly and the requirements for the Poincon de Geneve.

In the new facility, however, 180 employees create only movements. According to the company’s data, Vacheron Constantin produces about 15,200 watches annually. 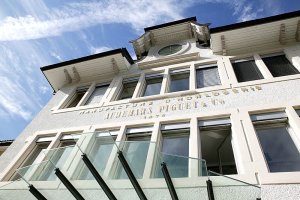 Little outside Audemars Piguet has seen its factory on the inside. The company’s officials do not allow taking pictures or filming for public use processes of making movement, cases and other parts of exclusive timepieces.

However, some interesting facts the company can be stated. About 2000 kg of precious metals are used to create AP watches. Inside its facility there are various departments like for example a department called “aesthetic design” departement. 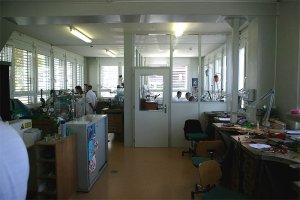 There various ultra modern machinery that participate in creation of timepieces, like for example a “tool set” used for milling a case band. The CNC machines are able to automatically change and select the necessary tool for a certain operation. It does so from a pre set “reservoir” of tools.

This photo represents the setting up of a lapidating machine, used for finishing work of a Audemars Piguet Royal Oak Offshore case.

It is worth mentioning that any polished angled portion requires an accurate adjustment of this machine. To refinish a ROO case the watchmaker needs a lot of time.

To celebrate its 125th anniversary, the watchmaking company Manufacture des Montres Rolex SA opened its new facility, which is its fourth. The building represents an industrial and administrative complex, located in Les Champs-de-Boujean. 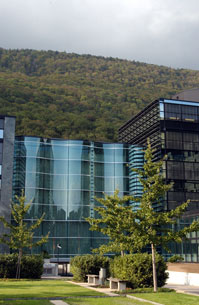 Today Rolex has a complex of some quite modern buildings, manufacturing installations, as well as offices located on a single site. An interesting feature is that the three buildings are linked by several underground corridors. This makes it possible for movement of both personnel and machinery.

The designer of the new building is Christian Zingg. The whole facility has 140,000 m3, fully air-conditioned. Its inside is made of green granite and the outside is made of smoked glass.

It is worth mentioning that the Watch Manufactory Rolex SA today has about 1500 people working in its four buildings. Every year the company creates around 700,000 movements.

In 1989 the German Democratic Republic ruled by communists collapsed in no time under the pressure of its own people. At that moment the watchmaking industry located in Glashutte had already found itself in a sadly poor state. The collapse resulted in deeply frustrated workers and watchmakers who felt devastated, having to face empty halls, a company close to bankruptcy, and a recently built and not really attractive huge production building. 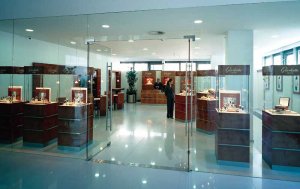 The Glashutte Uhren-Betrieb building in the small town of Glashutte represented a considerably-sized, rather ugly construction in brown shades and the company was housed there even after the end of the crisis. Successful businessman Heinz Pfeifer was the one who greatly contributed to the brand’s revival. Under his firm leadership, the company quickly gained its lost positions in the world of watchmaking and managed to soar into the highest skies of horology.

When Glashutte Original became the member of the Swatch Group, the company received the necessary funds and logistics for undertaking a massive rebuild of the factory. Having at the disposal an investment of several millions Euro and under the close supervision of Hayek, the factory rebuilding was performed with great efficiency. 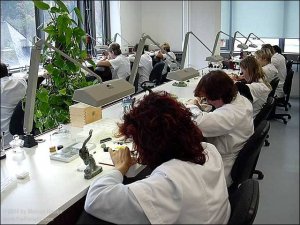 Only the basic steel structure and a few walls were subjected to no considerable changes, while the rest of the building sported the magic difference. The entrance doors lead into an amazingly spacious 23-meter-in-height atrium. The building acquired 300 square meters of glass roof, and 220 square meters of glass walls that are filling the area with great amount of daylight. The huge hall was designed for holding the reception of guests, the production highlights’ display, as well as for organizing a variety of cultural and social events.

Nowadays, every hall and room of the Glashutte Original factory is characterized by appealing modern style and spaciousness, while 1,400 square meters of glass facade provide remarkable brightness in every corner of the facility. All these wonders of the construction were achieved within just thirteen months. You will most probably be surprised to find out that the entire rebuilding process was fulfilled with no interruption of the Glashutte Original watch production!

The Chopard Manufacture is housed a building located on the Rue des Moulins in Fleurier. It was initially built in 1903 and the manufacture undertook the facility’s expansion several times. In the past, the building was tenanted by Fabrique d’Ebauches de Fleurier (FEF), that represented one of the many companies that used to supply movement blanks to the Swiss watchmaking industry supported by Ebauches SA ( presently known as ETA). The interior part of the facility has been subjected to thorough renovation. It was provided with state-of-the-art ventilation and lighting.

The ground floor of the building houses the workshops for movements’ production in one wing, while timepieces are prepared for shipping in the other wing. The manufacture has a special room equipped with highly automated CNC milling, as well as modern electric discharge machines. In the room Chopard experienced watchmakers magically turn raw materials into roughed-out cases and movement plates. The air in the room makes one immediately feel the scent of machining oil necessary for lubrication and cooling the cutting heads of the milling machines. The temperature gets warmer as a result of the output of the big-sized machines.

If you visit the other wing of the building, you will notice that there prevails an absolutely different atmosphere. It is cool and clean in the manufacture sections reserved for quality control and final casing. The Fleurier Manufacture is primarily focused upon the in-house movements’ creation, as well as the steel watches to join the brand’s famous L.U.C, Mille Miglia, and Happy Sport lines. Production at Fleurier annually gives birth to COSC-certified 3,000 movements and 25,000 wristwatches. 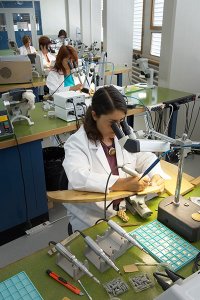 Quality control guarantees that every watch corresponds to the specifications for the particular reference number, and all parts are perfectly executed. As for the final assembly and casing, these stages take place in a positive-pressure room – dust together with other possible contaminants are blown away from any not air-tight joints.

When you move up the stairs and find yourself on the first floor, you will see there special facilities for movement component decoration, case and bracelet polishing, strict watch testing and movement manufacturing, with complicated watches being no exception.

Quality control of the movement components and parts represents a long process that implies checking 50,000 components annually, through 400 points of control, and amazing 4000 individual tests. On the list of well-known Chopard complicated watches you will find the L.U.C Tourbillon launched in 2003, and the ‘L.U.C Strike One,’ the timepiece introduced in 2006.