Most Expensive and Complicated

Swiss watchmaking industry has always been the home of both glamorous and complicated timepieces. No wonder the most exclusive and elegant watch models were created by the magicians from Switzerland. The development of extremely expensive and sophisticated watches represents a long tradition within the relatively short historical period, which in fact began at the second half of the 19th century. Today most Swiss watch brands manufacture their models for wealthy individuals, however, those who cannot afford a six digits price watch really don’t bother. Let’s take a look on what the watch industry has already offered to watch and jewelry lovers.

The popular Swiss brand Patek Philippe developed Calibre 89, which till nowadays holds the first position among the most complicated pocket watches. It is a gold commemorative watch launched in 1989, thus the name Calibre 89. With its release the company celebrated its 150th birthday.

Patek Philippe named its mechanical wonder “the most complicated watch in the world.” The timepiece weighs 1.1 kg. The whole watch model is made of not less than 1,728 components that provide 33 functions. Some of its indicators even include a thermometer, the date of Easter, sidereal time and a star chart with 2,800 stars.

Calibre 89 is made of 18 carat gold, which is 75% pure gold. It is valued at $6 million. It took 5 years of research and development, and then additional 4 years of manufacturing.

Only four models of Calibre 89 were manufactured: in platinum, white gold, rose gold and yellow gold. 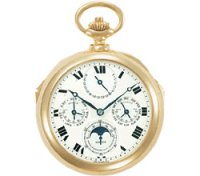 One of the world’s most important timepieces, the Henry Graves Supercomplication by Patek Philippe, was sold at Sotheby’s in New York City today for a world record $11,002,500 — the most ever paid for any timepiece anywhere in the world.

Most Expensive Wristwatch – Which is Also Most Complicated Wristwatch

Only seven pieces of the world’s most complicated wristwatch were produced. All horological and astronomical indications make up a list of 16 different features, including sunset time, perpetual calendar, second time zone and the representation of the night sky. The watch is made of 834 parts. Watch masters at Vacheron Constantin needed more than 10,000 hours of research and development to create the timepiece. 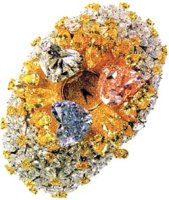 Undoubtedly the most expensive timepiece ever created came from Chopard of France. The watch is accurately enriched with diamonds on the interior, where the face of the watch is visible. Above the face there is a movable covering, which is full created of white and pink diamonds.

Chopard’s creation has three heart-shaped diamonds resting gracefully on the body of the watch: one is a 15 carats pink heart diamond, the second one is a 12 carats blue heart diamond and the third is a 11 carats white heart diamond. The bracelet is enriched with 163k of white and yellow diamonds that all together form little flowers. The price is quite “affordable” – only $25 million.