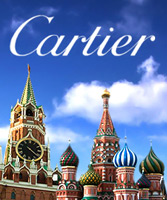 In the period between May 25 and August 25, the Moscow’s Kremlin museum houses the exhibition called “Cartier – Innovations through the 20th century.” The innovation spirit of the popular watch and jewelry brand is presented through 165 genuine pieces and 25 original drawings.

It is important to note that till now not one jewelry brand was allowed to present itself in Moscow’s highly protected place. Thus Cartier is the first brand that was granted the honor to open its exposition in Russia’s most famous ancient tsar citadel, which currently serves as a residence of the Russian government.

This unprecedented event represents the long friendship that bound Cartier and Russia since 1860, when the jeweler from the Rue de la Paix supplied its exclusive products to Russian princes in Paris. At the beginning of the 20th century Cartier became the official supplier of the court of Russian Tsar Nicolas II.

At the exhibition Cartier displays its 165 pieces that illustrate the history of horology design during the 20th century. The company presents its know-how along with its technical and ornamental contributions.

During the exhibition the jeweler from the Rue de la Paix will present all of its stylistic periods. The starting point is the garland style and the finish line is presented through modern and Art deco style.

Cartier shows its wonders inside the prestigeous setting found in Place des Cathedrales, in the belfry of Ivan the Terrible. The setting is just a few steps away of the Tsars’ treasure.