Representative of one of the leading luxury goods brands, Cartier, stated that South Africa is today rich enough to be able to purchase the brand’s products. Cartier decided to open its first store in this African country in November.

It is worth mentioning that currently the popular luxury brand is one of the most stable brands owned by Richemont, which is a huge group, managed by the Rupert family, with its headquarters in Switzerland.

The managing director of Richemont Southern Africa, the group’s office in South Africa, Wilhelm Landman, mentioned that Richemont for some time has been evaluating the perspectives of the local market, while waiting for a specific moment when it would be able to open its doors for the lovers of luxury goods. 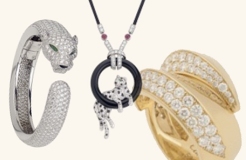 “We believe that the time is right and the South African economy has produced people with enough buying power to spend their money on our luxury goods,” outlined Landman. The company’s officials, however, withhold to mention the level of assets and liabilities Richemont looks forward to invest in its South African business.

Note that for the year to March, the operating profit of the group, gained from luxury goods, saw a 24 percent upturn, reaching 916 million euros. Luxury goods operations were able to generate not less than 970 euros.

Worth mentioning that among Richemont’s interests there is a number of some of the most prestigious brands in the luxury industry: Piaget, Vacheron Constantin, Jaeger-LeCoultre, IWC, Panerai and Montblanc.

“The World Wealth Report by Merrill Lynch and Capgemini reports growth of high net worth individuals in South Africa at 13.3 percent for 2006, not far off the pace of higher-growth countries like Russia and South Korea,” outlined Roy Chapman, an equity analyst at Sanlam Investment Management.

Cartier already opened in 2007 its store in Shanghai, positively altering the demand for luxury goods among the Chinese elite.