In 2007 Omega presented to the horology world the latest addition to its legendary Speedmaster watch line – the Omega Speedmaster Broad Arrow. The timepiece features ‘Broad Arrow’ hands, the distinction of every Omega Speedmaster. The Omega watch is powered by a new movement and comprises a variety of luxurious features.

In the heart of the new Omega Speedmaster Broad Arrow there beats Omega self-winding movement, Caliber 3313. The reliability and accuracy of the mechanism is guaranteed by the Co-Axial escapement technology, initially introduced in 1999 and applied for the Omega De Ville watch models.

The Co-Axial escapement diminishes friction in the mechanical watch movement, so the lubrication becomes lees necessary and the entire mechanism offers reliability and accuracy over a long period of time. The column wheel chronograph mechanism provides a really smooth start to the sweep of the seconds hand when the chronograph function of the watch gets activated. It also serves as the guarantee of the precision stop and reset functions. The officially COSC-certified chronometer offers 52-hour power reserve and the date function presented through a window at 6 o’clock. 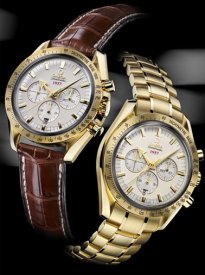 The Omega Speedmaster offers the choice between models crafted from different materials, including a rare combination of stainless steel and 18K red gold. The three variations of the Omega Speedmaster in gold go with the novel ‘screw and pin’ bracelet that lets the watch’s owner to adjust the bracelet to the necessary length in no time.

The Omega Speedmaster Broad Arrow inherited from the Speedmaster watch family not only arrow-head hands, but also a range of other distinctive features such as curved and facetted horns and the tachymeter scale sported by the bezel. The dial of the Omega watch is created in three different colors – refined silver, chocolate brown, and sleek black. The polished ‘Broad Arrow’ hands are Superluminova-coated to provide perfect legibility. 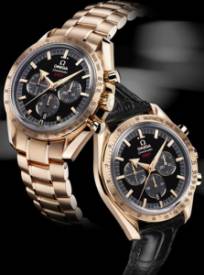 The nicely polished and brushed case of the Omega Speedmaster Broad Arrow watch measures 42 mm in diameter. The Omega watches water-resistance up to 100 meters is reached due the crown and chronograph pushers provided with double gaskets. Real connoisseurs of timekeeping mechanisms will appreciate a view of the Co-Axial 3313 movement visible through the sapphire crystal case-back. As for the dial’s resilience, it is explained by the domed scratch-resistant sapphire crystal with anti-reflective treatment.

The Omega Speedmaster Broad Arrow watch is secured to the wrist with the ‘screw and pin’ bracelet patented by the brand. Provided with discreet screws, the bracelet consists of brushed and polished links that may be easily changed to match the wrist size of the watch’s owner. The bracelet, skillfully integrated into the case, is characterized by perfected flexibility and improved aesthetic look. It is equipped with a safety clasp and is crafted from the same materials as the Omega watch’s case – red gold, yellow gold, and red-gold-stainless-steel combination. There is one more variation of the Omega Speedmaster Broad Arrow made of stainless steel and accompanied by the traditional stainless steel bracelet designed as the first solid link bracelet dating back to the 1960’s.

Those who like timepieces that go on a leather strap, will surely prefer the stainless steel Omega Speedmaster Broad Arrow the look of which is completed by an elegant brown calfskin strap, while the yellow gold watch model is available with a brown alligator strap.