In the mid 1980’s Seiko began supplying British Forces with wristwatches. The result of this work has turned into Seiko Military Watch Line for RAF (British Royal Air Force).

Ian Fogden or simply “Foggy”, British Military Seiko expert, reckons that now there exist three issued Seiko brand chronographs for RAF. It may seem strange, but the line is the one and only…yet.

In this article we want you to get acquainted with the Seiko Military Watch Line for RAF. 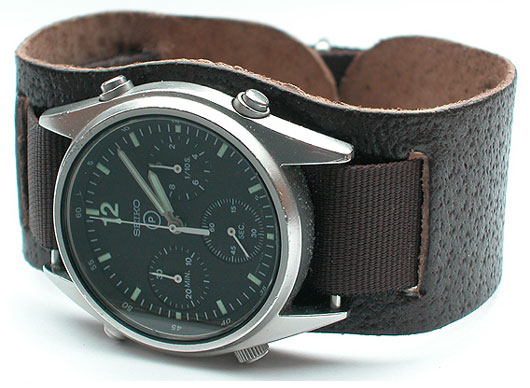 The first Seiko military watch model issued for RAF was procured primarily to Royal Air Force pilots and navigators. According to documents there was 11,307 pieces of the Seiko military model Gen. 1.

The model features a stainless steel case. It carries the highly-regarded, 15-jewel, quartz 7A28 Seiko movement. RAF-issued Seiko military watch (Gen. 1) has three pushers and has all the usual chronograph functions including: split times and 1/10 sec timing, as well as second and minute indicators up to 30 minutes.

The sub-dial measures tenths of a second actively until 10 minutes have passed. Once the chronograph is stopped the hand will move to the correct position indicating the tenths of a second that have elapsed. I seems to me that was a power saving feature.

As a result of the application of Promethium 147 (a mildly radioactive emitter), the dial has luminous markers. The case excluding the crown and pushers measures 37mm across and has an inter-lug width of 20mm. As it is required by the MoD, all Seiko military models fit fixed strap bars.

The crystal is mineral glass, although you should know that Seiko no longer carries the original crystal.

RAF-issued Seiko military watch (Gen. 1) is considered to be one of the most sought among military watches. And it is not surprising, as the watch model is full of relative scarcity as well as its simple elegance, and its high quality.

But unfortunately it is rather hard to find in stores. You can buy it mostly from collectors where the price ranges from $500 to $600. 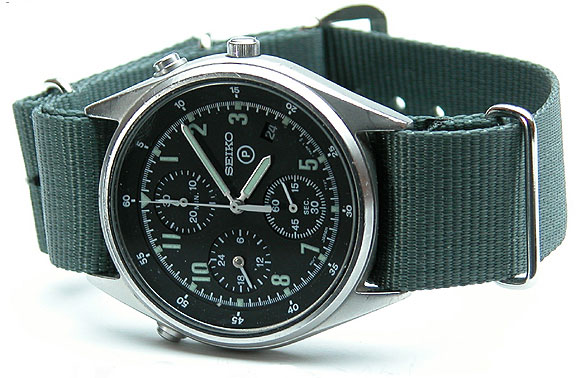 After a two year lag Seiko again began to supply the MoD with chronographs. The next model was Seiko military chronograph Gen.2. The case shape and dimensions changed, becoming latter and slightly larger in diameter in comparison with the Gen.1 model.

But there were not only the external changings – the watch functions also changed.

Less costly new non-jeweled movement was the main changing in the watch’s heart.

RAF-issued Seiko military watch (Gen. 2) dial has a small oval date window at “4” showing the day of the month. The Gen. 2 has just 2 pushers instead of the one in previous model.

The dial register at “12” is the 30 minute counter used when the chrono functions are on. The register at “6” is the continuous seconds which run whether or not the chrono is on. The register to the left, at “9”, indicates the current hour based on 24 hours. This register, unfortunately, can not be set independently for use as a GMT hand.

The model also fits Promethium 147 luminous markings, so you won’t need to light a candle sitting in the dugout. 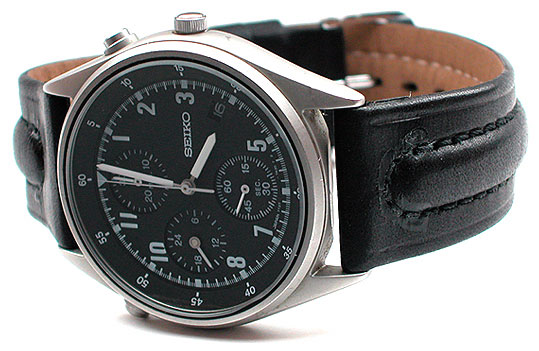 The interesting fact is that this Seiko military watch version was purchased for the Royal Navy, primarily for crew on HM nuclear submarines.

The model is perfect for use in any environment where luminous material might interfere with sensitive military equipment.

Seiko ended supplying Submarine crews with the non-luminous version in 2000. Although the military watches are still in service.

Because of the relative scarcity of the RAF-issued Seiko military watch (Gen. 2) non-luminous model this version typically sells for a slight premium over its luminous twin. Depending on condition and provenance prices start at $450 and can go over even $500.

Hope that you enjoyed the information. And now you know that watches to choose for “feeling in the army now!”