Racing began in the morning on Monday under mild and sunny conditions with northerly winds 15-18kts – perfect conditions for fast sailing and great viewing from the beach.  Breezy conditions were forecasted to continue throughout the week. But, the weather conditions changed during the week and could be characterized as chilly, if not cold. And the wind did blow with only one day partially lost to light breezes. Early on Thursday the 49er gold fleet reckoned that “light air finesse” was the key in five-knot conditions.

Racing ended the weekend Saturday in the midst of rain, but that didn’t wash off the sailors’ enthusiasm as Seiko prizes were waiting for them. Seiko is the official sponsor of the 49er Class and title sponsor of the 2010 World Championships. 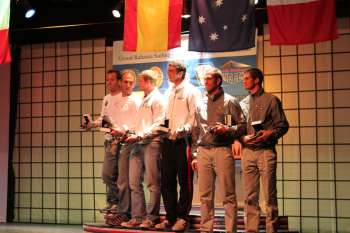 To conclude, Seiko 29er & 49er World Championship Regatta 2010 winners in the 29er category are French sailors Kevin Fisher and Glenn Gouron. Being keeping the lead they gained on day four and sailed to victory, winning by 28 points.

While in the 49er category – Iker Martinez and Xabier Fernandez of Spain won their third 49er World Championship (’02, ’04, ’10) adding to their Olympic Gold medal from Athens in 2004 and Silver medal from Beijing in 2008.