SEIKO Velatura Automatic-Chronograph Is Won by the Australians 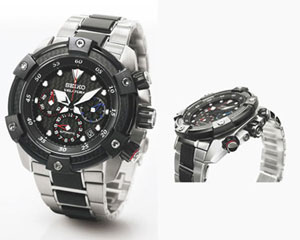 In 2007, Seiko became the watch partner of the International 49er Association, having provided the leading sailors with the two Velatura Automatic-Chronograph watches from Seiko Velatura watch collection.

A 49er is a small class of sailing dinghies that used starting off sailing career, at age seven or so. Since their introduction as a selection at the Sydney Summer Olympics in 2000, they’ve been steadily growing in popularity.

In 2009, Seiko has expended its partnership with the Association. The winners at the 2009 World and European Championships, held in Italy and Croatia respectively, were awarded with Seiko Velatura Yachting Timer watches – piece of the Seiko Velatura edition.

Seiko Velatura watch collection is meant to be the most perfect choice for sailors but also powerful water proof pieces. The most problem on sport watches is the closure near the bezel can not be made perfectly cause the bezel must move or be pulled up. Seiko came with the revolutionary system that the bezel must be screwed inside the case and the bezel now transforms into a piece that is attached to the watch just like the assembly of a car. The actually using of the crown is taking place thanks to the unique mechanism.

In return of being the main Olympic sailing classes sponsor Seiko has gained valuable insights into the needs and wishes of the top athletes. And recently the Seiko Velatura collection embraced five new models, the most remarkable Seiko Velatura Yachting Timer.

It’s nice to see Seiko appearing in these kinds of events, usually reserved for Swiss giants. So the CEO of the International 49er Class, Marcus Spillane is very grateful Seiko for the “Speed Challenge” launching and support. It has provided a wonderful opportunity for the sailors to try new techniques and to go right to the limit with Seiko Velatura Automatic-Chronograph.