on: Jun 22, 2011In: Vacheron ConstantinNo Comments

Vacheron Constantin is a well-known Swiss watch-making company. It’s claimed to be one of the oldest Swiss watch manufacturers with outstanding features. One of their prominent timepieces Grand Complication pocket watch, was among the New York auction bids on June 15th 2011 and fetched a price as high as 1,800,000 USD. It was a 20-carat gold pocket watch by Vacheron Constantin, presented at Christie’s auction. 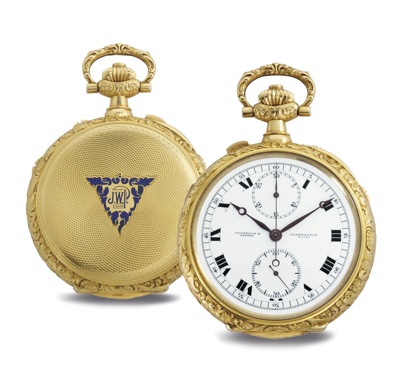 The previous owner of the watch was the collector James Ward Packard (1863 – 1928), the famous automobile manufacturer from the USA and the devoted watch collector. He was acknowledged to be one of the first and most serious Swiss watch collectors from America, who co-operated directly with the expensive pocket watch manufacturers.

According to the Christie’s auction in New York, strong interest of collectors to Vacheron Constantin watches was clearly confirmed, especially to this given item of Grand Complication pocket watch in 20-carat gold.

It was not the only expensive pocket watch by Vacheron Constantin presented during the auction, but was truly proved to become a star among the others by fetching the amount of $ 1,800,000.

Adequate result for a high-quality watch especially with such features as this pocket watch has: rock crystal glass, presence of hour, minute and second display along with quarter and half-quarter repeating, grand and petite sonnerie and a 30-minute chronograph register.

It also features JWP initials on its enamel, engraved exclusively for James Ward Packard. Moreover this piece is in an excellent shape being preserved in the bank safe, untouched for approximately 60 years’ term.