The official website of the popular Swiss watch manufacturer IWC will feature an auction between December 12 and 19. The auction will include an exclusive timepiece and a rare edition of Courier Sud (Southern Mail), which is the first novel written by the famous French writer Antoine de Saint Exupery. The novel bears Exupery’s own dedication written by hand.

The timepiece to be presented on auction is called “Pilot’s Automatic Edition Antoine de Saint Exupery” and it is a special edition watch from IWC. 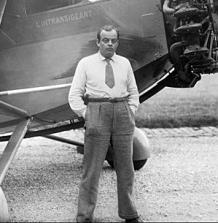 The number of pieces is limited to only 1,929. This number is surely symbolical. 1929 is the year when de Saint Exupery published his Courrier Sud. However, the watch presented on auction is unique in the limited collection, it’s the only one from IWC made in platinum.

The platinum case watch has an automatic movement with a display, showing its power reserve. It also includes large seconds hand, an indicator of the date, which looks like the altimeter display in an aircraft. “Pilot’s Automatic Edition Antoine de Saint Exupery” features a relief engraving on its back. The engraving outlines the geographic array of operations during the French author/pilot’s era. It is worth mentioning that de Saint Exupery was born in 1900 and in 1944 apparently disappeared when being on a flying mission during the Second World War.

The exclusive timepiece features a brown buffalo-leather strap. It’s 44-millimeter case includes a dial featuring a tobacco color. The dial is marked with silver A along with luminous large Arabic numbers and hands, so reading the time would be available in the dark. The inside of the case is made of soft iron. It has a screw-in crown and its convex sapphire glass, having antireflective coating on both sides, provides the watch with 60 meters water resistance.

The money gathered from the on-line auction will benefit a school which was named in honor of de Saint Exupery. The Ecole des Sables – Antoine de Saint Exupery located in Mali, a country found in the West of Africa, is an institution that provides schooling for Tuareg children, wondering, nomadic people.