Officine Panerai and Ferrari have long established a firm partnership. In 2007 the lovers of cool racing cars and boldly designed watches were excited on hearing the news: Panerai has become the sponsor of the Shell Ferrari Historic Challenge. The championship, famous for its really special atmosphere, maintains close links with the House of Maranello.

The Shell Ferrari Historic Challenge is organized in two different series, in North America and Europe, including the traditional final event held in both countries – the Ferrari World Finals. Ferrari cars that appeared up to 1982 take part in the championship. The organizers of the events divide all the cars into special categories according to their characteristics:

Among the Ferrari cars registered to participate in the Shell Ferrari Historic Challenge, there are five that were produced in the period of 1934 -1939. During the same period in Florence, quite close to Maranello, Giuseppe Panerai developed the first Radiomir watch model. In represented a technically advanced timepiece to enter the series of Panerai watches commissioned by the Italian Navy. 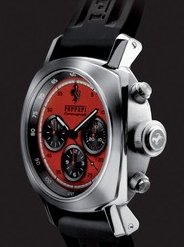 The Panerai-Ferrari cooperation started with the watchmaking company’s decision to produce a watch collection featuring the name of Ferrari. The sponsorship offered by Officine Panerai to the Shell Ferrari Historic Challenge has marked one more important step made by the company on the path followed for already several years. The prominent names of the partners are united by continuous search for advanced technology and innovative design.

In 2007, Officine Panerai is going to release eight new watch models to join the Ferrari engineered by Officine Panerai range. Four timepieces will enlarge the Granturismo Collection, two will enter the Scuderia Collection and two special editions are aimed to commemorate the House of Maranello’s 60th anniversary.

The major 2007 event in the Shell Ferrari Historic Challenge Europe will be organized at the Mugello Autodrome. The place will simultaneously host an international festival of vintage motor racing. Then it will witness the Silverstone and Le Mans great classic venues.

The North American series will also feature a really special event – the Californian Infineon Raceway that will include other Ferrari sporting activities, with the FXX Program, the single-model F430 Challenge, and exhibitions of client F1 single-seaters among others.