Vacheron Constantin – Exclusivity in Everything 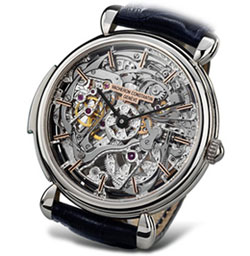 The Les Cabinotiers Skeleton Minute Repeater watch is a genuine work of art. The timekeeping wonder appeared due to horological achievement and expertise of Vacheron Constantin’s watchmakers. The timepiece is powered by the most sophisticated Vacheron Constantin movement and features the finest skeleton, both distinctions united under the platinum case. This work of art is launched in a limited number of just 15 pieces. Moreover, Les Cabinotiers Skeleton Minute Repeater watch deserves special attention of watch enthusiasts as the world??? slimmest ever created skeleton minute repeater watch.

The watch is elaborately decorated – half of the basic movement is delightfully cut away. It provided the timepiece with supreme lightness and elegance. The watch’s transparence is due to the amazing fact the sapphire dial’s thickness never exceeds thirty-hundredths of a millimeter. Vacheron Constantin’s creation is a wonderful means to watch the time passing by. Les Cabinotiers Skeleton Minute Repeater watch is really worth to be called an item of luxury destined for just few most passionate ( and, naturally, wealthy) watch connoisseurs.

Skeleton Watch “Phenomenon”Why are skeletonized timepieces so appealing? The secret of their success is evident – a real lover of the horology world is fascinated by the ability to enjoy watching the entire movement of the piece as well as appreciate timekeeping complications and displays.

The process of developing such an exclusive skeletonized masterpiece requires unsurpassed technical expertise that just a few watch houses are proud to possess. The size of all watch’s details has been reduced in the most refined and precise way.

The brand’s skeleton watches are also distinguished due to their finish. Vacheron Constantin watchmakers carefully examine every tenth of a millimeter of metal using a loupe to be able to adjust and polish even the most barely visible screw by hand. The brand’s watchmakers overwhelmed by the last for perfection, technical precision and beauty, perceive every complication of such a watch first of all as a kind of challenge and personal achievement.

Vacheron Constantin has long established its reputation of really few watch manufacturers maintaining the tradition of skeletonizing matchless watch movements. The range of the brand’s achievements in the area comprises the movements from the simplest to the most awfully complicated ones.

The Art of the Minute RepeaterEven those watch lovers whose imagination is captured by the latest technological innovations, appreciate the minute repeater as the greatest challenge in the art of watch-making. Every minute repeater is created to be one of its kind as for its decoration, sound and history.

Somewhere in the period of the 1980s Vacheron Constantin set a goal to develop an absolutely new Minute Repeater. Initially, the brand’s watchmakers took time to disassemble a 1940s wristwatch. To work up the concept of a new Minute Repeater, they had to draw up plans, buy necessary equipment. The idea of a new Minute Repeater could be realized just by a solidary team of the most skillful and passionate watchmakers. The team came through four years of research and hard, yet enjoyable work. As a result, in 1993 Vacheron Constantin was proud to present the first piece, the caliber 1755. The choice of 1755 is obvious – the watchmakers honored the year of the company’s foundation. Les Cabinotiers Skeleton Minute Repeater watch has been equipped with this legendary caliber.

The movement comprises more than 330 parts, while it is just about 3.30 mm thick, as it has already been mentioned – it is the slimmest in the world. The process of developing such a movement naturally consists of numerous stages, so each wonder takes not less than 320 hours to be created. Each part of the mechanism and case is handcrafted. As the result, watch connoisseurs are given the joy to listen to the purest possible sound that is improved by the Les Cabinotiers Skeleton’s sapphire crystal case back and dial. The Vacheron Constantin caliber 1755 has two tones. The lower pitch is for the hours, the higher one for the minutes. The high and low pitch sounds for the quarter-hour.

Vacheron Constantin has one more reason to be especially proud by presenting its Les Cabinotiers Skeleton Minute Repeater – the brand values the tradition of developing beautiful platinum watches.