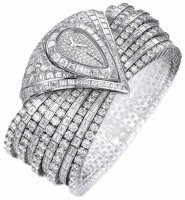 Harry Winston has further refined its skills in creating haute jewelry watches by developing three new timepieces highlighting the brand’s favorite stone – the diamond. The designers crafted each jewelry watch in the ornament style – a cameo, a hair ribbon and a necklace clasp for a lady to choose the one that best suits her mood and attire. Each piece reveals a different cut – a pear, emerald and oval shapes.

The first of the trio reflects the Harry Winston credo – “only the exceptional”. The Duchesse seems to become the incarnation of Harry Winston’s dream to “attach the diamonds directly onto female skin”. The setting is almost invisible, so the diamonds may fully express their beauty and brilliance. By overlapping diamonds and geometric grace the watch’s designers created its three-dimensional form. They were inspired for the Duchesse by the cameo ornament that is often used in scarf securing. 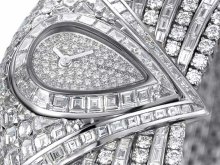 The triangular pear-shaped case reminds a brooch with the nine parallel strands of the bracelet. Four of the strands are set with baguette-cut diamonds and five of them with round-cut diamonds. The bracelet’s strands may be compared to the scarf beneath a cameo, nicely accentuating the wrist’s contours.

The Duchesse bracelet has been handcrafted to reflect the “one stone, one link” principle. The artisans wanted to avoid any gaps between the gemstones. They set every gemstone in a “reverse pyramid” motif, so that the stones seem to be free-mounted.

Each bracelet strand is independent, yet the strands are united symmetrically with help of the clasp press. The brand’s artisan jewelers developed the claw, representing the screwed part closing the cameo back in an open-work pear shape. This way they allowed the watch’s admirers to rest their eyes upon the interior of the timepiece and provided access to the time-setting corrector found on the case-back.

The new Harry Winston collection of haute jewelry watches introduce a new sophisticated dimension of the “set of jewelry” concept. Duchesse has been created to become the first jewel in the crown. Two other timepieces to join the collection are expected to appear later this year.