Once we have touched upon the issue of weird watch collection, the list of the most unusual swiss watches, which are produced in limited editions. Designers don’t stand still and work out new models of watches with unique dials, so we are ready to continue this topic. 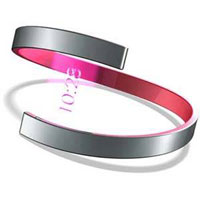 You will definitely fall in love with this watch model. It’s smooth, rather modern and the time is displayed on a hologram surface through the negative space. Such an unusual watch displays the time only when you want it to, in another case it looks more as a bracelet. Hologram weird dial and cute double silver-pink bracelet…can it be cooler? 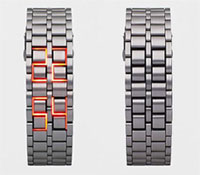 Japanese designers are worthy considered to be real inventors with the original sense of humor. Now see that Faceless Led Watch made by Hironao Tsuboi Metal band of apertures partly became digital display screen. Red figures and metal band naturally harmonize with each other. Without a traditional watch dial, it displays figures only when needed and does it quite vague.

Designer Sander Mulder thinks that watch is not a thing that simply tells you what the time is. He devised new conceptual weird table watch which will impress men of taste.

This unique contrived watch shows the time by rolling on the table or other flat surface. But you won’t find usual figures on it’s dial. Instead of the common marks “12”, “8” etc. time is shown in vague phrases. F. ex. to express the period from 8 to 9 the watch uses phrase “it may be more like around eight, but if you want, it could be nine”. That can be seen at the bottom of the dial that touches the table. This interesting invention suit the most busy, nervous people, who are trying to relax watching clock’s measured tread. 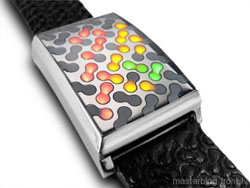 TokyoFlash Infection is another amazing wrist watch from our list of weird watches It combines tri-colored LEDs, sleek curves and a pulsating new display. To present the time from beneath the attractive mirrored mineral crystal lens twenty-seven multi-colored LEDs pulsate and move like cells across the curved face. Twelve red LEDs indicate hours, eleven yellow LEDs represent the progression of time in groups of five minutes and four green LEDs show single minutes. Among other frills of this watch model is a single touch of the upper button which animates the LEDs, and a single touch of the lower button to show the time immediately. 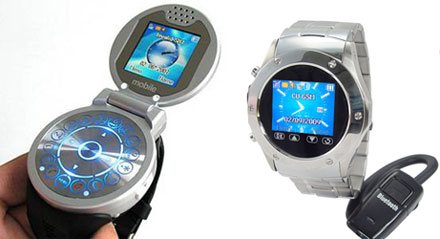 Now it’s the time to say “NO” boring fashion! Of course one can find this watch a little bit unpractical, cause talking on the phone while holding your wrist up to your ear fetters a lot. However, this problem is solved by using headsets with booms or bluetooth features. By the way, guys, this unique cell phone watch fits out 1.3 MP digital camera, mp4 videos, Bluetooth and what is more has touchscreen capabilities. So the time to take your cell phone out of your purse definitely came. 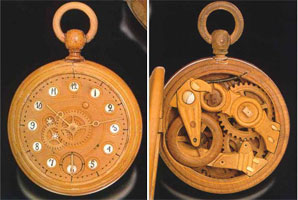 Really incredible wooden watch. It probably was produced in Russia in early 1900′. That country is famous for the wood artisans. All parts except the springs are made of wood. So if you are going to become a happy owner of that unique model you should master wood crafting at first or be ready to visit the country of many contrasts. 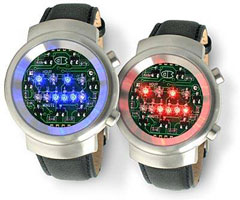 If you are an absolute computer geek, then this wield watch model must be on your wrist without saying! Of course you need to learn the binary language; in another case you won’t be able to read the time. So if informatics is not a strong point of yours we strongly recommend you to take a course of this discipline.

At first sight this outstanding bangle can’t appear to be a watch. But it is incredibly true! Really it is rather flexible and ergonomic, attractively suits the lines of the wrist. An opening end of the bangle contains the hidden unique watch dial case opposite to a polished stainless steel surface on which time is mirrored. This unusual watch model is made of stainless steel and Elasten 3000 rubber. Mechanism is equipped with 30m water resistant. And by the way it is the Winner of a Dusselderf University student design competition. 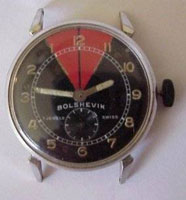 We are sure that nostalgia was the main impulse for this weird creation. It’s peculiarity is the rare mechanical counter-clockwise movement. On the dial one can read “SWISS“, so perhaps this is a very rare watch produced by the only communist in Switzerland. As there are some quartz counter-clockwise watches. 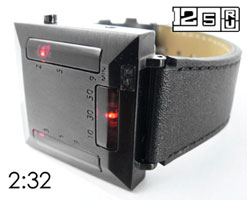 This industrial-looking unusual watch with a sci-fi twist is the C Version wristwatch from the Twelve 5-9 design team at Tokyo Flash. The 12 LEDs on the left represent hours, the nine on the right represent the minutes in between and the five on the bottom represent minutes in units of ten. Press the button to display the time and you’ll be amazed by the weird patterns that prelude the final time indication. The C Version is 3.6 centimeters across, 3.6 centimeters long, and 1.2 centimeters thick, and features a band made of solid stainless steel. 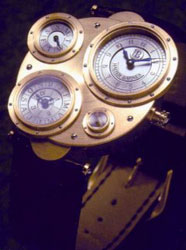 This representative of weird watch collection uses the standard way of telling the time … on the dazzling dials. They feature hand-engraved letters and numbers, and the automatic movement’s and a circular rotor, that makes this model probably the most bizarre to appear in the past few years. That perpetual date calendar watch fits out four dials indicating the hours, minutes, day, date and month. The case, which has a screw-down back, is fashioned in 72 g of 18K gold, fastened with 54 platinum rivets. The crown is decorated with 24 rivets and a platinum cabochon. The dials are also made of platinum. The complicated movement, visible through the transparent case back, was developed on the HB 198 calibre. 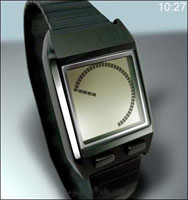 And again facing to the Japan TokyoFlash crew. Feel like you’ve stepped out of the spacecraft when this weird watch model is on your wrist. The future is felt in its unique digital display that could be mistaken for a video game. Fusing futuristic and retro looks, this watch fits out an ’80s-inspired black, 16-millimeter-wide stainless steel band that joins a 26-millimeter-wide case with a similar vintage feel. The watch equips water resistant to 99 feet. In another wordsthis sturdy watch is a digital masterpiece.