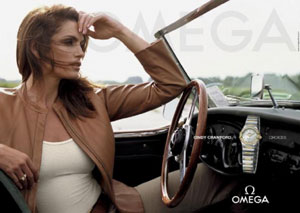 The former American model, Cindy Crawford is known for her trademark mole just above her lip. Cindy has gifted her beauty to hundreds of magazine covers throughout her career. She was named third on VH1’s 40 Hottest Hotties of the 90s. Her fame and success at modeling led her to roles in television and to work as a spokesperson.

Since 1995 the face of Gianne Versace, Escada and etc. is OMEGA’s ambassador and is the one among other company’s other ambassadors to promote OMEGA luxury swiss watches for such a long period of time.

“I’ve been an ambassador for Omega watches for over 10 years” – Cindy says. “During that time, I’ve travelled the world on their behalf – to places such as Japan, China, Panama, Italy, Spain, New Zealand, and India. I helped redesign the Constellation My Choice watch as part of their relaunch.”

She was proposed to join the “OMEGA family” for her fashion scent and because her style fits the brand perfectly. Crawford shares many of OMEGA’s values, including quality, reliability and a strong sense of tradition.

Cindy participates in different company activities. Advertising campaigns go without saying, then in giving her personal input and helping to give the finishing touches to the Omega watch models. Moreover she is actively involved in product design. Her experience and inspiration are valued by OMEGA.

On the 9th of June 2008 still one of the most beautiful women in the world Cindy Crawford participated in the Grand Opening of the OMEGA Boutique in Panama. The opening was coincided to the 160th anniversary of the company. When Cindy Crawford publicly made the Constellation her choice, a generation enthusiastically followed her lead, making the watch she inspired its own choice. Now a glamorous new diamond-studded collection of the iconic timepieces is being launched in celebration of the date.

Now the wristwatches in OMEGA’s Constellation line are among the most recognisable and popular in the world as Cindy helped redesign the Constellation My Choice watch as part of Omega’s relaunch.

Crawford continues to provide celebrity endorsement for a variety of projects. In 2005, Crawford created a line of beauty products with Dr. Jean-Louis Sebagh called Meaningful Beauty for Guthy-Renker.

Cindy recently launched a new line of furniture under the “Cindy Crawford Home Collection” name. She assisted in the creation of the line by designing and including certain features, colors, or styles that fit the needs of families or reflected her own tastes. She also has a furniture line with Raymour & Flanigan and will launch another home goods line with J. C. Penney in late 2009.