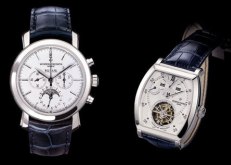 Jennifer Hudson, the Academy Award Winner, who is also one of “10 Most Fascinating People of 2007” of Barbara Walters, performed for the elite of the Big Apple.

Undoubtedly the oldest watchmaking company that continues operating on the market today, Vacheron Constantin, introduced its new 2 watch models made of Platinum from the brand’s collection entitled Platinum Excellence Collection. The new timepieces were presented at the XChange in New York City, an event meant to commemorate Clive Davis for his important contribution in the music industry as a Record Producer and Executive who achieved Multi-Platinum sales.

His career started at CBS; then he founded Arista Records and today Mr. Davis continues working as the Chairman and CEO of BMG.

Jennifer Hudson was introduced to the public as Clive Davis’ new prot?g?. Jennifer sang four songs, several of which were from her new album.

The President of Vacheron Constantin North America, Julien Tornare, was the one to welcome another celebrity Kate Bosworth.

DJ Cassidy was the one to entertain the crow by spinning some of the biggest hits sand by Clive’s artists.

Throughout the whole evening the event’s attendants were able to admire the new platinum watches from Vacheron Constantin. The brand also presented its collection of historical platinum timepieces that date back to the 19th century and which were brought from the Vacheron Constantin Museum in Geneva, Switzerland.

Models dressed in custom-made platinum walked through the crowd with the brand’s timepieces from the current collection, giving guests the possibility to admire and touch the handcraftsmanship of each watch.