The Miami Vice creators wanted to liberate what is dangerous yet tempting about working deeply undercover. The IWC watches are used in the movie as the reflection of the new modern style of Miami and Miami Vice. For one of the major characters the movie creators opted to include the IWC Portuguese Chrono-Automatic and the IWC Aquatimer Split Minute Chronograph. 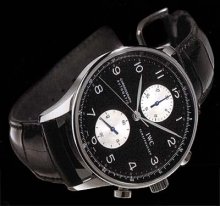 Ricardo Tubbs, played by Academy Award winner Jamie Foxx, works undercover together with his partner,intel analyst Trudy, played by Naomie Harris. The agents get involved into transporting drug loads into South Florida in order to identify a group that committed three murders.

During the daytime scenes in the movie Ricardo Tubbs wears the IWC Portuguese Chrono-Automatic. The timepiece displays a big sleek dial with black face and silvery sub dials. The Chrono-Automatic turned out to be perfectly suitable to reflect Miami Vice shift to it’s new modern look and feel.

During the nighttime scenes, Ricardo Tubbs has the IWC Aquatimer Split Minute Chronograph on his wrist. The watch has been developed with the lightweight titanium case and bracelet. It is provided with luminous elements to offer the necessary legibility in any light conditions. The Aquatimer Split Minute Chronograph sports clearly laid-out dial. It has been chosen as an ideal timekeeping companion for the hot days and nights shot in such exotic surroundings as Paraguay, Uruguay and the Dominican Republic.

Corresponding to the top present-day standards of technological development and praised for their supreme precision, the IWC watches represent the choice of many celebrity personalities who wear the brand’s creations to complete the image of their movie-character’s attire.