Tissot T-Touch Ventures Out in “Mr. and Mrs. Smith” 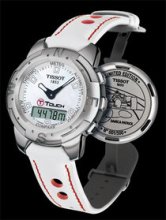 Tissot T-Touch appears in the Twentieth Century Fox movie “Mr. and Mrs. Smith”, staring Hollywood celebrity couple Brad Pitt and Angelina Jolie. The main characters, John and Jane, that seem to lead the ordinary life of two married people turn out to be assassins highly-paid for their efficient work. Each spouse works for different employers, keeping the secret of their ‘careers’ even from each other. Naturally, John and Jane need high-tech equipment, including watches, to perform their jobs in the best and safest possible way.

One day John’s and Jane’s marriage acquires one more source of excitement – they get the task to assassinate each other. As the action evolves, Angelina Jolie’s every step is accompanied by Tissot T-Touch, her effective covert companion.

In one thrilling desert movie scene, Jane sends up her target and then repulses an attack by her husband. The lady-assassin needs her Tissot T-Touch to get critical information for the successful fulfillment of her assignment.

In fact, ‘Mr. and Mrs. Smith’ has become the second movie sporting Angelina Jolie wearing the Tissot watch. It followed another action movie, ‘Lara Croft Tomb Raider: Cradle of Life’. No wonder, the one-of-a-kind touch screen watch entered the list of the most highly-demanded models produced by the 153-year-old watchmaking company.

Tissot T-Touch has been developed to offer its owner a wide range of useful functions simply by activating the tactile crystal. Besides common date and time functions, the watch’s wearer is provided by a compass, a chronograph, an alarm, barometric pressure and temperature readings, as well as an altimeter. The above mentioned functions are outlined on the bezel of the Tissot T-Touch. Every function gets activated by the single touch on the glass.

The Tissot T-Touch is also characterized by the cutting-edge design. Being based upon utmost precision technology, the extraordinary timepiece is the ideal fit in the thrilling and dynamic environment of the action movie, filled by challenging adventures, incredible stunts, globe-trotting action, and state-of-the-art special effects.