on: Apr 15, 2007In: Celebrities and FashionNo Comments 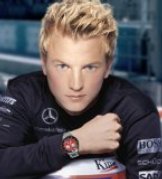 Kimi Raikkonen, universally famous as the most prominent Formula 1 Scuderia Ferrari driver, has become the new TAG Heuer ambassador. The star of driving is going to take part in the development of the brand’s Avant-Garde Eyewear line. Kimi followed the steps of one more successful driver – Sebastien Bourdais, the champion of 2004-2006 ChampCar World Series, and China Team (CHN 95) challenge to the 32nd America’s Cup this Spring in Valencia.

Kimi Raikkonen has been greatly interested in the project. The Finnish driver has collaborated with TAG Heuer Eyewear in the elaboration of an original eyewear line for speed-lovers and fans of motor racing. Kimi wants the line to be based upon sharp design tastes. He supports the idea that sunglasses make up an essential part of one’s personal style. Kimi adores professionally designed items and likes to discover something different. The products developed in collaboration with TAG Heuer Eyewear will enter the driver’s personal collection of accessories.

Right now Kimi has stopped his choice at the new TAG Heuer Zenith sunglasses. The sunglasses are worth special attention for their auto-adjustable titanium temples provided with ultra adherent hypoallergenic elastomere coating, and an unbreakable shield. The series meant for passionate drivers offers its owners supreme lightness and comfort, the necessary aerodynamic and sun protection, not to mention the distinctive trendy style.

At present day Kimi Raikkonen the most popular F1 drivers worldwide, the honorable participant of the 2007 F1 World Championship. Fans of Raikkonen believe that he was born to race. Since his early years, Kimi disposed great talent and strong passion for car, motor and ski racing. Overtime, Kimi won a ‘meteorite’ title in the field of motor racing.

Having ‘starred’ in Formula Renault, the sportsman joined Formula 1  the most dramatic entry in the history of racing. Kimi was rightfully appreciated as Michael Schumacher’s most persistent title challenger in 2003 and 2005. Starting from 2001, Kimi has gained an impressive list of achievements, including 10 victories, 12 pole positions and 20 fastest laps.

Kimi Raikkonen has recently become the winner of the opening race of the season that took place on the 18th of March in Melbourne, Australia. The driver has been striving for entering the Hall of Fame for the ultimate title. It is a remarkable fact about Kimi’s career that he followed the steps of J. M. Fangio in 1956 and became the second who managed to make the “hat trick” for his first race with Formula 1 Scuderia Ferrari team, which implies pole position, fastest lap, and victory.