on: Mar 18, 2010In: Celebrities and FashionNo Comments 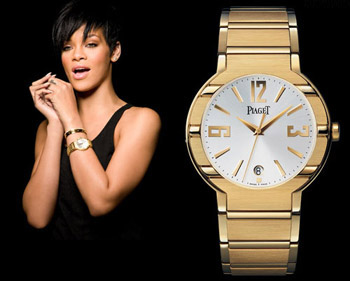 Rihanna was spotted to present Piaget’s watches and jewelers in her music video. In her clip “Take A Bow”, reflecting the end of relations with the boyfriend, Rihanna was shown in the Piaget Polo, Piaget’s most celebrated timepiece. Not forget to mention multiple Possession bracelets adorning the wrists of Rihanna.

Piaget Polo watch is a large model. Case and bracelet of the model are in 18 carat yellow gold. You can notice Arabic numerals and hour-markers in yellow gold. The movement of the watch is self-winding with a date window at 6 o’clock.

The chic of the yellow gold Piaget Polo watches and bracelets makes a striking contrast against the black tank top minimalist in nature, which Barbadian beauty wears throughout the video.

And of course the Piaget watch appearance on the R & B singer Rihanna’s wrist in the video can be characterized as a specific advertising campaign. The first image I saw was not Rihanna’s face – as expected. The first few seconds of the video start out focusing on a gold watch on her wrist. 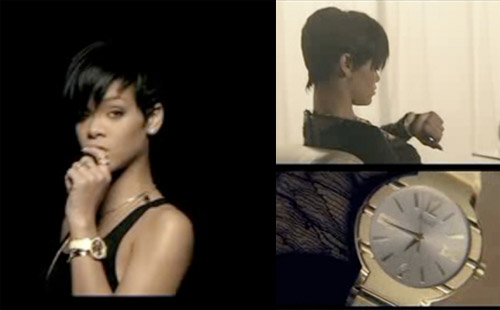 Then Rihanna looked at her watch several times in a concerned manner. Not that it is illegal to do that, but there really wasn’t anything in the story line of the video to support it – it just seemed strange.

And in the end of the video 2-3 second product placement of a gold Piaget Polo watch. The shot lasted too long for a simple watch apparition.

But we should do justice to Rihanna. It takes a special kind of woman to get away with wearing a men’s watch. But Rihanna has this kind of style. Or may be she is taking example from Victoria Beckham’s wearing Rolex Day-Date Presidential Champagne Mens watch?