Richard Mille and Philippe – Only Watch 2007 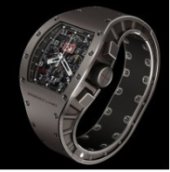 Richard Mille and Philippe Starck have joined efforts to support Only Watch, an Antiquorum-organized auction that presents exceptional watches. This time the auction will take place on September 20, 2007. Exclusively for the auction, Richard Mille and Philippe Starck have created a remarkably complicated timepiece characterized by extreme forms. All proceeds received from the auction will be donated to a Duchenne muscular dystrophy charity.

Richard Mille and Philippe Starck had already successfully cooperated in 2005, having developed the Mille/Starck watch highly appreciated by watch critics and connoisseurs. Then the timepiece was sold at the auction for the record price – amazing Euro 285,000.

The unique timepiece developed for Only Watch 2007, has marked one more important step for Richard Mille and Philippe Starck . You will be surprised by the watch’s unconventional look. At the first glance the timepiece may seem audacious. However, the Richard Mille – Philippe Starck creation is based upon utmost reliability and advanced technology. This titanium-crafted feat of watch-making is developed in a bangle-form.The Mille/Starck watch 2007 features one-of-its-kind design that combined modernity and toughness. The lateral case structure is maintained throughout the bracelet’s length . The case back of the timepiece has been subjected to vulcanization to offer maximum comfort and softness when worn on the wrist.

The watch is driven by the sophisticated movement that has incorporated distinctive Richard Mille technical characteristics, including the variable geometry rotor. The rotor has a unique ability to optimally adapt the winding of the barrel spring to the activity of the watch’s owner.

The originality in every detail is the major concept of this stylish and imposing Mille/Starck 2007 watch, also distinguished due to its masculine appeal. The watch’s talented designers managed to create a uniquely styled timepiece offering ultimate performance and unconventional beauty.