Charlize Theron to be the New Ambassador of Breil Milano 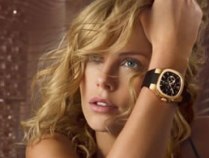 One of the most popular and most elegant actresses of Hollywood, who is also the Academy Award winner, Charlize Theron, will soon become the ambassador of the Italian Luxury brand Breil Milano.

Several images of the actress already appeared, being the part of the company’s fall ad campaign. The images include Charlize Theron in a black cocktail dress, which looks really glamorous, and cascading blond curls. The ad campaign of Breil Milano was shot in July the current year in Los Angeles; however it saw the light on October 7 in Italy.

The brand looks forward to lunch its campaign in several countries including: Unites States, Germany, Spain, Portugal, France, Netherlands and the United Kingdom. Officials from Binda Group, the parent company of Breil Milano, estimated the 2007 budget of the international campaign to be about $21.4 million.

Company’s representatives mentioned that the Hollywood actress was chosen not only for her natural beauty, but also for Charlize’s “modern woman personality”.

“The actress represents a new type of woman, a mix of sensuality and determination, sophistication and down-to-earth attitude, elegance and simplicity. She will be in charge of personifying a new female target whom Breil Milano wants to speak to and help drive the brand’s international expansion,” outlined the company’s representatives in a press release.

Breil Milano, a brand which is present in more that forty countries, looks forward to work further with the actress for its international expansion and the development of new high-end collections.

The multi-year contract presumes that Theron will play the major role in all advertisements of the Italian Brand. These include spots on both television and cinema, as well as print media and outdoor ads. The advertisements will we presented in all countries where Breil Milano markets its products.

It is worth mentioning that the South-African actress was also the face of other brands from the jewelry industry, including the Swiss watchmaker Raymond Weil. The watchmaking company later sued the actress earlier this year for the fact that she violated the terms of contract when she photographed with a watch of a competitive brand.