on: May 05, 2007In: Celebrities and FashionNo Comments 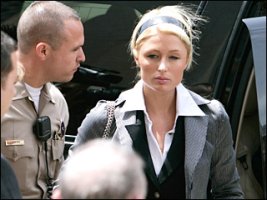 Paris Hilton was sentenced to spend a month and a half in jail. The world-famous heiress must report to a women’s jail in suburban Lynwood on June 5. Hilton violated probation in the case of alcohol-related reckless driving. She was driving with a suspended license.

Before the judge passed the sentence upon her, Paris Hilton said she felt sorry she was not attentive enough and did not mean to do it on purpose. However, the judge was sure the young woman was perfectly aware about her suspended license. Defense attorney Howard Weitzman was shocked by the sentence and wanted to appeal, while City attorney spokesman Nick Velasquez expressed his personal opinion that the judge’s ruling was a clear proof that in Los Angeles everyone must observe the law.

The judge did not allow any alternative jail or electronic monitoring, furloughs or work release. As a jail inmate, Paris Hilton will have to spend her days in a small cell in spartan conditions. Her cell would be 12-by-8 feet. It will have a toilet, sink and a window. Taking a shower, watching TV, working up or talking on the phone will be her only comforting activities allowed during the prison sentence. Hilton will have three low-sodium meals a day. The dinner will be the only hot meal.

Hilton’s parents were also present in the courtroom, both deeply upset by the judge’s decision. Her mother said that it was all nonsense and could not believe her daughter would have to serve time in jail. As for Paris herself, she did not want to comment on the case and went straight to the car.

The story of Paris Hilton’s disgrace started in September when she was arrested while driving intoxicated and did not pass a field sobriety test. During the hearing in January Paris pleaded no contest to reckless driving. Then, the judge sentenced her to 36 months probation, alcohol education and paying fines of $1,500. However, it did not stop Hilton from minor law-violations – she was twice stopped for careless driving and failed to attend a mandated alcohol education program.

If Paris Hilton fails to report to the jail as she has been ordered, the glamorous girl will have to face 90 days behind bars.