on: Apr 28, 2007In: Celebrities and FashionNo Comments 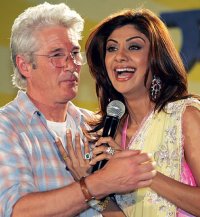 An Indian court has issued a warrant for arrest of Richard Gere. The charming Hollywood actor is a wanted man in India after he displayed in public the signs of affection towards Bollywood actress Shilpa Shetty. Gere and Shetty took part in an HIV/AIDS awareness event organized on April, 15 in New Delhi. Richard Gere just swept the Indian celebrity into his arms and kissed her. Footage of Gere kissing Shetty were more than once broadcast on Indian TV. The pictures of kisses appeared on front pages of Indian newspapers.

There naturally appears a question – what is criminal about it? The answer is simple  Indian people are prohibited by law to display affection in public. The actor’s actions were called ‘obscene’ and provoked strong protest of crowds of Indians who burned the actor’s images. On April, 26 Dinesh Gupta, a judge in New Delhi, issued arrest warrants for the both celebrities – Gere and Shetty. According to the Indian laws, a person accused of public obscenity is subject to spend three months behind bars or pay a fine.

Shilpa Shetty tried to defend herself and the actor, having stated that the public and media attention should be concentrated on the major issue raising people’s awareness of HIV and AIDS. The Indian beauty added that Richard Gere’s actions reflected the normal patterns of behavior in his own country. On her opinion, people really overreacted to Gere’s behavior who just wanted to entertain the audience. He no way meant to hurt someone’s feelings. In one of Richard’s films  Shall We Dance  there was an episode with the same pose. Moreover, Richard Gere apologized to the actress.

As for Richard Gere, he is not preoccupied with the ‘kisses-incident’ and his possible arrest. The celebrity actor considers the warrant for his arrest as not a serious matter. The actor added that all the buzz was made by an Indian small right-wing, conservative political party that may be compared to the moral police in the country. Gere is absolutely sure that if the case goes to a reputable court, it will get thrown out.