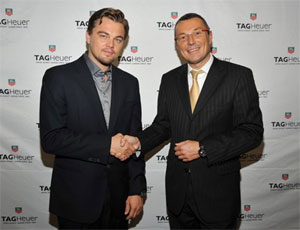 The three-year agreement is a unique one for TAG Heuer and DiCaprio, with the royalties generated from the deal going to support the Natural Resources Defense Council (NRDC) and Green Cross International. In addition, a multi-million dollar commitment from Mr. DiCaprio will go to support environmental charities.

As global ambassador for TAG Heuer, DiCaprio will be promoting several of TAG Heuer’s products, including the brand’s 43-millimeter Carrera Day-Date chronograph, a brand spokeswoman said. DiCaprio is the latest star to join TAG Heuer’s “What Are You Made Of” advertising campaign, for which other brand representatives include Uma Thurman and Tiger Woods.

While the brand does not disclose contract details, the royalties generated on select TAG Heuer products, as well as a portion of DiCaprio’s own fees, will be donated to support a major environmental organization, a brand spokeswoman said.

The 34-year-old award-winning actor has a long history of activism on behalf of environmental issues. The Leonardo DiCaprio Foundation, established in 1998, has actively fostered awareness of environmental issues by partnering with such organizations as the Natural Resources Defense Council, where DiCaprio is on the board of trustees; Global Green USA, where he serves as a board member; and the International Fund For Animal Welfare, where he is on the honorary board of directors, according to the foundation’s Web site.

“Leonardo DiCaprio is far more than an actor,” said Jean-Christophe Babin, CEO and president of TAG Heuer. “He is a man who wants to change the planet and improve the plight of children in need. He is contributing his skills and wealth to a better, smarter world.”
TAG Heuer is proud to announce Leonardo DiCaprio as its ambassador because they share the same relentless drive to push innovation and exceed expectations, especially their own.