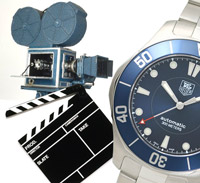 Movies of the 21st century might have less life and emotions than googd old movies of the 20th century, but then certainly do not lack technologically advanced equipments. Today, more and more often the main characters in Hollywood movies wear whether complicated mechanical watches or extremely accurate quarzt timepieces with digital and analog diplays, having a wide variety of functions.

Below there is a short list of movies the main characters of which were spotted wearing various timepieces of popular watch brands. Now you may check out what do Hollywood made policemen, spies, adventurers, clones and ordinary family guys wear on their wrist.

In this movie Danny Archer, played by Leonardo DiCaprio, wears a watch from the popular watch brand Breitling. The name of the watch model is Breitling Chrono Avenger.

Latest movies about the “well-known” spy James Bond features Daniel Craig as the main character who at the beginning of the movie wears an Omega Seamaster Planet Ocean.

A comedy with Adam Sandler, who plays Michael Newman, features a moment where the main character wears a Hamilton Khaki.

The movie based on the comic book Hellblazer is the story of a detective who has supernatural powers, John Constantine. In the story he has been to hell and back. This action movies featuring Keanu Reeves as John Constantine, has a sequence where John wears an Oris Modern Classic.

The producers of Underworld were also the one to work on this tale about four teenagers who were born with supernatural powers. Sebastian Stan who plays Chase Collins wears in this fantastic movie a TAG Heuer Carrera.

The science-fiction and action movie The Island has the main role played by Ewan McGregor. His character Lincoln Six Echo was seen wearing a TAG Heuer Monza.

In the comedy-action movie John Smith, played by Brad Pitt, proved to be an IWC fan. He wears an IWC Spitfire Chronograph 3706. His wife is more fond of Tissot, which is why Jane Smith, Angelina Jolie’s character, wears a Tissot T-Touch.

Tom Cruise who played David Aames in Vanilla Sky is also a fan of IWC. He was spotted wearing an IWC Mark XV watch model.

Here is second part of article Watches in Movies